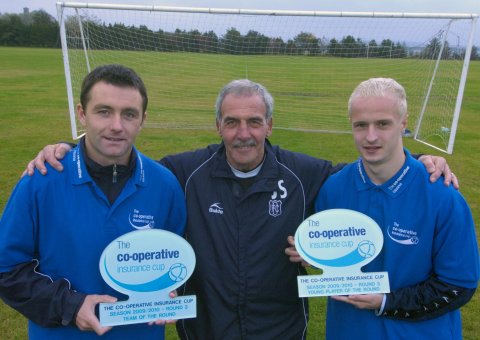 The Co-operative Insurance 2009/10 Third Round Awards

TEAM OF THE ROUND - DUNDEE F.C.

Jocky Scott first tasted success in this Cup competition in 1973 and nearly 36 years later, he has been successful again with his Dundee side being awarded The Co-operative Insurance Cup Team of the Round for their fine show in the Third Round of this season’s competition.

The Dark Blues saw off Aberdeen 3-2 after extra-time last month at Dens Park with his side bouncing back after the Dons scored two late goals to force 30 minutes of extended play.

Eddie Malone nodded Dundee ahead in the first half before young midfielder Craig Forsyth fired in a second with Aberdeen’s Michael Paton, who has spent two periods on loan at Brechin City, looking to have turned things around in Mark McGhee’s favour when he scored twice.

Leigh Griffiths netted the winner to see him clinch The Co-operative Insurance Cup Young Player of the Round award with Scott commenting, “You could say that we won that game twice. You would normally expect the team that comes back from two goals down to force extra-time to have the ascendancy but my players dug in and instead of Aberdeen dominating us, we went out and won the game again.”

Scott, who also won the IRN-BRU Phenomenal Manager of the Month for September, added, “It is always nice for the team to be recognised and that is what The Co-operative Insurance Cup Team of the Round Award does. That night the players were magnificent and they did exceptionally well. We now, of course, have a very high profile plum tie and will need to perform to great heights again.”

For the 61-year-old boss, it was another fine achievement in a competition where he was a winner for the first time when Slade topped the music charts with Merry Xmas Everybody.

Scott was part of a Dundee side that triumphed at Hampden in December, 1973 when Gordon Wallace scored the only goal in a 1-0 win over Celtic in a match watched by less than 28,000 fans as industrial action throughout the country had seen the game kick off at 1.30pm to avoid using floodlights.

Match winner Wallace’s strike partner said, “It was not the best of games but it was certainly enjoyable to win as Celtic had a strong side under the guidance of Jock Stein and with the likes of Kenny Dalglish playing for them.”

Three years later, Scott’s brightest moment in an Aberdeen jersey came under the lights at Hampden, as he scored a hat-trick in a midweek 5-1 Semi-Final win over Rangers in the
competition.

Again Scott’s team ethic shines through saying, “That was a great team performance and I just happened to score three of the goals. We won 2-1 against Celtic in the Final that year and that was another great day.”

Scott was asked if he realised that these events were over three decades ago and he replied, “It may seem like a long time but I remember them all vividly.”

Whilst Scott may have killed off Aberdeen’s hopes of success in The Co-operative Insurance Cup this season, he was at the helm along with Alex Smith when Rangers were beaten 2-1 in October, 1989 thanks to a double from Paul Mason.

A win on Tuesday would see Scott complete a hat-trick of sorts against the Light Blues in high profile ties, although the pragmatic nature of the Dens Park Manager shines through saying, “I am fairly sure that the events from twenty and thirty years ago will not have any bearing on this game. We will just need to go out and give it our all and see where that takes us.”

PLAYER OF THE ROUND - PADDY MCCOURT

Celtic’s Paddy McCourt was voted as The Co-operative Insurance Cup’s player of the Third Round after his dazzling display at Falkirk.

The moment that ensured McCourt would win the award for the Third Round came in the 64th minute when, with the Hoops already two goals up thanks to a Scott McDonald double, McCourt picked the ball up ten yards inside his own half and he set off on a run from right to left that saw him ghost past Falkirk defenders before lofting a delicate shot over Robert Olejnik.

Twenty five-year-old McCourt was asked if his goal against Falkirk was the best of his career and the Northern Ireland internationalist said, “I have actually scored other goals that are probably better but playing for Celtic and at the level I am playing at now, I would say that the Falkirk goal was probably my best one.”

McCourt, who signed for Celtic from Derry City in the summer of 2008, was pleased to be playing in the last round of The Co-operative Insurance Cup saying, “It was one of my first appearances for the club so I was delighted to be part of a 4-0 win and it was great to play well at an early stage of my first team career. I was delighted to score a goal and receive the Man-of-the-Match award and being awarded the Player of the Round makes it very satisfying indeed.”

McCourt won the equivalent tournament, the FAI League Cup, twice with Derry City in his time with the Candystripes however, a win with Celtic this season would be special for McCourt who said, “It was great to win with Derry, but here we are, the defending champions of this cup, and we are out to win every competition so it is very important.”

McCourt’s early season form with Celtic earned him a recall to the Northern Ireland World Cup Qualifying playing squad with the player adding, “It was good to be back in the fold but I was disappointed not to get any time on the pitch but I have to say, it was great to be back involved.”

YOUNG PLAYER OF THE ROUND - LEIGH GRIFFITHS

September was an excellent month for Dundee’s exciting young forward Leigh Griffiths as not only did he find the net five times in the month, he picked up the IRN-BRU Phenomenal Young Player for the Month Award and to top things off, he was also named as The Co-operative Insurance Cup Young Player of the Round for his performance against Aberdeen on 22nd September.

The summer signing from Livingston was delighted with his latest recognition saying, “The Aberdeen game was an all round great team performance where I was fortunate to score the winner. The atmosphere at The Co-operative Insurance Cup tie was brilliant and we all contributed to a great win for the club. It is a nice reward to be at home for our next tie in The Co-operative Insurance Cup against one of the Old Firm.”

The Dark Blues had raced to a two nil lead through goals from Eddie Malone and Craig Forsyth before the Dons hit back to force extra-time. Griffiths took advantage of frailties in the Aberdeen defence to ram home the winner with the match finishing 3-2 to the First Division side.

Griffiths added, “There were over 6,100 fans at that game and the noise was great with the rivalry between local teams and different divisions thrown in. I reckon that was the biggest crowd I have played in front of, and whilst it is nice to be recognised on my own, it was a great night for everybody connected with Dundee whether they are a fan, player or coach.”

The teenager missed out in playing against the other half of the Old Firm last year, when a knee injury saw him miss out when Livingston played Celtic at Parkhead in The Co-operative Insurance Cup. With Rangers visiting Dens Park on Tuesday, Griffiths is keen to make amends saying, “Livingston lost 4-0 that night when Roberto Landi was their Manager. If I am selected for the Rangers game, it will become the biggest game I have played in and the crowd is likely to be more than the Aberdeen game as well.”

Asked if he would do anything different for the one off game against the Glasgow side, Griffiths replied, “I will just focus on playing my normal game. I watched Rangers against Unirea the other night and thought they were unlucky as three of the goals were unfortunate deflections and I have not read too much into their 4-1 defeat.”

Morton’s Caretaker Manager, James Grady, was recently reported as saying, ‘Leigh Griffiths had a very quiet game, had one chance and scored from it.’ The Dens Park striker was asked if he would settle for that description after The Cooperative Insurance Cup tie with Rangers and he replied, “I would bite your hand off for it if we won 1-0 and I scored the winner.”