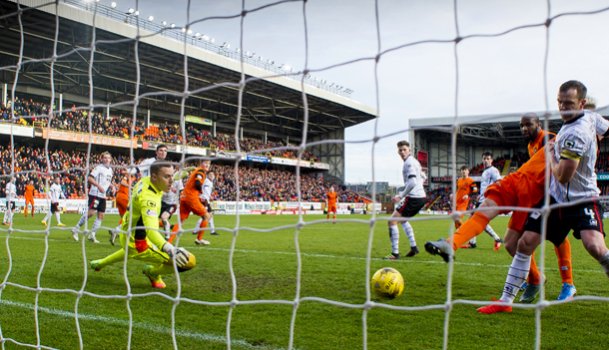 United move to top of Championship

Dundee United moved to the top of the Ladbrokes Championship with a 2-1 win over bottom club St Mirren at Tannadice.

Dundee United moved to the top of the Ladbrokes Championship with a 2-1 win over bottom club St Mirren at Tannadice.

John Sutton opened the scoring for Saints but Scott Fraser and Simon Murray netted for Ray McKinnon's men before the interval.

Hibernian were knocked off the summit after being held to a 1-1 draw by Raith Rovers at Easter Road. Jean-Yves M'voto gave Rovers the lead but Martin Boyle rescued a point for Hibs with a late leveller.

Morton are up to third place thanks to a 1-0 victory over Queen of the South at Cappielow, where Thomas O'Ware got the only goal.

Ayr United and Dumbarton drew 4-4 in a remarkable game at Somerset Park. Scott McKenna and Gary Harkins had Ayr 2-0 up but Robert Thomson and Daniel Harvie levelled matters. Alan Forrest's penalty restored the Honest Men's lead after Andy Stirling was sent off but Joe Thomson equalised and Ryan Stevenson earned the Sons a point after Paul Cairney had edged Ayr 4-3 ahead.