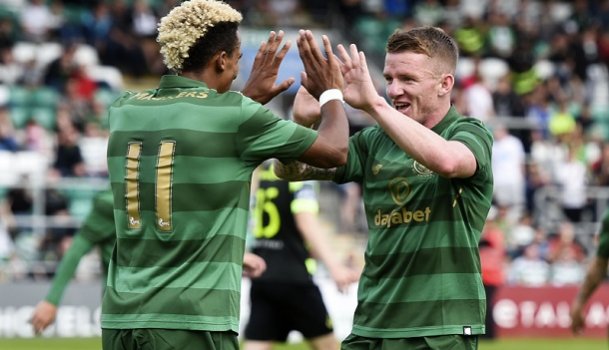 The majority of SPFL clubs were in pre-season friendly action at the weekend as the build-up to 2017/18 continued.

The majority of SPFL clubs were in pre-season friendly action at the weekend as the build-up to 2017/18 continued.

Celtic thrashed Shamrock Rovers 9-0 in Dublin while Hearts ran out 4-1 winners against Linfield in Belfast. Dundee came from behind to beat Arbroath 2-1 at Gayfield and Kilmarnock defeated Livingston 1-0 at Rugby Park but Motherwell lost 3-2 at Gateshead.

Albion Rovers and Dumbarton drew 1-1 in a testimonial for Alan Reid at Cliftonhill and it finished 0-0 between Alloa Athletic and St Mirren at the Indodrill Stadium.

Morton coasted to a 6-1 victory at Highland League Turriff United while Brechin City were 2-0 winners away to local rivals Montrose. Stranraer hosted Dutch side FC Twente in a glamour friendly at Stair Park, with the visitors posting a 5-0 win.

Raith Rovers edged out Clyde 2-1 at Broadwood and Elgin City surprised Inverness Caley Thistle 2-0 at Borough Briggs. Forfar Athletic drew 1-1 with Highland League Formartine United at Station Park and it was 0-0 between Berwick Rangers and Morpeth Town at Shielfield.

Stenhousemuir hit Real Kashmir for six at Ochilview and Peterhead were 3-2 winners at Fraserburgh while Stirling Albion saw off East Fife 4-1 in a closed-doors game.

On Sunday, Hibernian and Sunderland draw 2-2 at Easter Road in a testimonial match for Lewis Stevenson while Annan beat Gretna 2008 4-1 in the Raydale Cup.