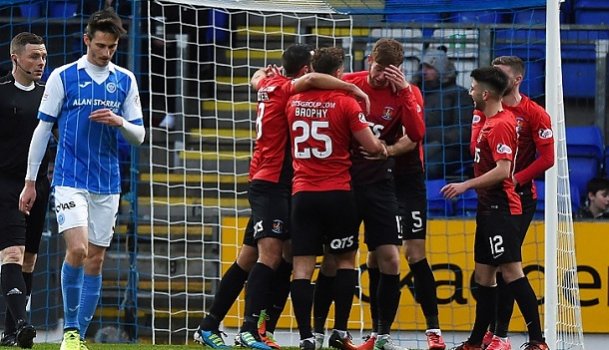 Resident statto @splstats crunches some of the numbers from the weekend games across the four divisions of the SPFL.

Resident statto @splstats crunches some of the numbers from the weekend games across the four divisions of the SPFL.

7 – Kilmarnock defeated St Johnstone 2-1 at McDiarmid Park to continue their fine away form under Steve Clarke. Killie are now unbeaten in seven away matches, which is their best run since August-December 2000 when Bobby Williamson was in charge. Even more impressively, the run included matches against all of last season’s Premiership top six – they picked up draws against Celtic, Rangers and Aberdeen, and victories over Hearts, Partick Thistle and St Johnstone. Saturday’s success continued Killie’s recent winning record in Perth – they have now recorded four consecutive victories at McDiarmid Park.

0 – Hibernian are just a point off second place in the Ladbrokes Premiership after beating Partick Thistle 1-0 at Firhill on Saturday. Neil Lennon’s men are now one of just two sides in the SPFL unbeaten away from home in the league this season – the other being Celtic after Stirling Albion’s weekend loss at Berwick. Hibs’ only ‘defeat’ on the road this season came against Ross County in the Betfred Cup group stage, when they lost the bonus point shoot-out after a 0-0 draw. If we count that as a draw, Hibs have only been beaten in two of their 33 away matches in all competitions since the start of last season.

11 – Dundee United climbed to the top of the Ladbrokes Championship after beating Dunfermline Athletic 2-1 at Tannadice. The Terrors trailed St Mirren by five points in late October but have picked up four wins and a draw in their last five league matches and are now a point clear. Dundee United are now unbeaten in their last 11 matches against Dunfermline in all competitions, with their last defeat coming back in August 2011. Since then, United have picked up 10 wins and a draw, racking up a 24-6 aggregate score in the process.

7 – Ayr United defeated Albion Rovers 3-2 at Somerset Park to maintain their three-point lead at the top of Ladbrokes League 1. The Honest Men have recorded seven consecutive wins in all competitions for the first time since ‘Breakfast at Tiffany’s’ by Deep Blue Something and ‘Say You’ll Be There’ by the Spice Girls were topping the UK charts, back in August-November 1996. Ian McCall’s side haven’t lost a game since September 9 – they have earned nine wins and two draws in 11 matches since then, scoring an incredible 35 goals.

20 – Peterhead climbed to third place in Ladbrokes League 2 after beating Edinburgh City 3-0 at Balmoor on Saturday. The Blue Toon have won six of their last seven matches in all competitions, the only blemish being a 3-2 defeat to Stenhousemuir. Rory McAllister netted a double to take his tally for the season to 20 goals from 20 matches; the striker has reached the 20-goal mark in eight of the last nine seasons. His best ever haul was 33 goals in 2013/14, but with a minimum of 24 matches still to play he will fancy his chances of topping that figure this time around.