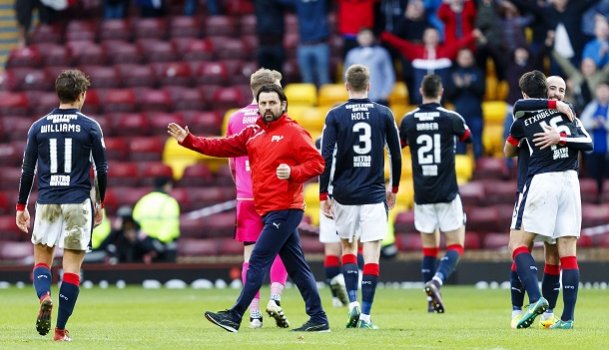 @splstats looks at some of the numbers behind the weekend games, with the focus on Dundee, Inverness CT, St Mirren, East Fife and Annan.

@splstats looks at some of the numbers behind the weekend games, with the focus on Dundee, Inverness CT, St Mirren, East Fife and Annan.

5 Dundee thumped Motherwell 5-1 at Fir Park in the Ladbrokes Premiership to continue their excellent run of form against the Steelmen. Paul Hartley’s side have won six of their last nine matches against Well and have suffered just one defeat in that period. Darren O’Dea was the oldest player in the Dundee line-up and he was only 10 months old the last time the Dee scored five or more goals away from home in the top flight. That came in December 1987, when goals from Tommy Coyne (3), Keith Wright (2), George McGeachie and Graham Harvey handed Dundee a 7-1 victory over Morton.

14 Inverness Caledonian Thistle climbed off the bottom of the Ladbrokes Premiership with a dramatic 2-1 victory over Rangers at the Tulloch Caledonian Stadium on Friday night. Billy Mckay’s 89th-minute winner handed the Caley Jags their first league victory since October, ending a club record run of 14 matches without a win. It is just the second time Inverness have beaten Rangers at home – the other victory came back in December 2006, when goals from Darren Dods and John Rankin handed Charlie Christie’s side a 2-1 victory over Paul Le Guen’s Gers.

3 St Mirren boosted their Ladbrokes Championship survival chances after beating Ayr United 2-0 at Somerset Park on Saturday. Jack Ross and his side defeated East Fife and The New Saints in their previous two fixtures and have now won three matches in a row in all competitions for the first time in over four years. Saints have now won 13 matches this season but amazingly only three of them were in the league, with the other 10 coming across three different cup competitions. The Buddies are now unbeaten in their last six matches against Ayr in all competitions, with the last victory for the Honest Men coming in the League Cup quarter-final in 2011/12.

10 East Fife moved a point clear of Queen’s Park in the race for the final Ladbrokes League 1 promotion play-off place after drawing 1-1 with Peterhead at Balmoor on Saturday. Barry Smith’s side have picked up six wins and four draws in their last 10 league matches and have strung together their best unbeaten run in almost nine years. The last time the Fifers went 10 or more league matches without defeat was at the end of their 2007/08 Third Division title-winning campaign. Saturday’s draw also extended East Fife’s unbeaten run against Peterhead to 11 matches in all competitions – the Blue Toon have not beaten them since March 2013.

3 Annan Athletic defeated Clyde 1-0 to move eight points clear in the race for the final Ladbrokes League 2 promotion play-off spot. The Galabankies have recorded three consecutive 1-0 victories and have won five of their last six matches – the exception was a 4-1 reverse at Berwick. This is Annan’s ninth consecutive season in the bottom tier since joining the League but if Jim Chapman and his men continue their current form, they could make it to the third tier of Scottish football for the first time in their history.