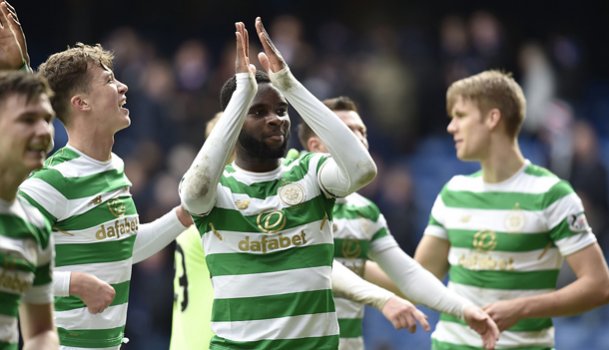 9 – Celtic extended their lead at the top of the Ladbrokes Premiership to nine points after coming from behind to defeat Rangers 3-2 at Ibrox. The Hoops have gone nine matches without defeat against Rangers since Brendan Rodgers took over, which is their best ever unbeaten run against their Glasgow rivals. Celtic have now recorded four consecutive victories at Ibrox, equalling their best ever run of wins there - the only previous time they achieved this was from March 1907 to January 1909.

5 – Hibernian defeated Heart of Midlothian 2-0 at Easter Road to move to within two points of third-placed Aberdeen in the Ladbrokes Premiership. Hibs have recorded five consecutive wins over Hearts at Easter Road, equalling their best ever run of home victories over their Edinburgh rivals – the only previous time they managed five in a row was between September 1972 and January 1976. Hibs lost to Hearts in the Scottish Cup at Tynecastle in January but that was their only defeat in the last 11 derby encounters.

6 – St Mirren moved 11 points clear at the top of the Ladbrokes Championship thanks to a 2-0 victory over Dunfermline in Paisley. Saints have taken 31 points from their last 12 league matches, with the only dropped points coming in a defeat against Livingston and a draw with Morton. Jack Ross’s side have recorded six consecutive victories at home without conceding a single goal – these victories have followed the pattern 1-0, 2-0, 1-0, 2-0, 1-0, 2-0. This is their best run of home clean sheets since they moved into the Paisley 2021 Stadium in 2009 and is just one short of the club record of seven, set between March and August 2005.

3 – Ayr United defeated Raith Rovers 3-0 at Somerset Park to move to within a point of their opponents at the top of Ladbrokes League 1, with a game in hand. The Honest Men have recorded three consecutive 3-0 victories in the league, taking their tally of league goals to 73, the highest of any club in the SPFL. Saturday’s success ensured Ayr came out on top in the head-to-head with their title rivals - they also recorded a 3-0 win on Raith’s previous visit in November and drew 1-1 at Stark’s Park in January, with Rovers’ only win coming in the first meeting in Kirkcaldy back in September.

3 – Peterhead moved three points clear at the top of Ladbrokes League 2 thanks to a 1-0 victory over in-form Stirling Albion at Forthbank. The Blue Toon’s victory all but extinguished the Binos’ title hopes, and the race now looks like a straight two-way fight between Peterhead and Montrose, who are three points behind with a game in hand. Jim McInally’s side continued their excellent away form – they have won 11 of their 15 away league matches this season, and have only suffered two defeats on the road.