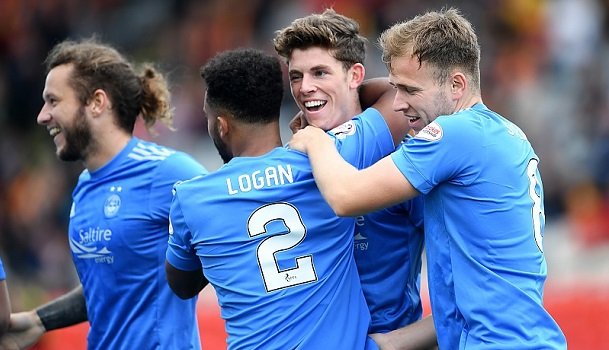 Resident statto @splstats looks at some of the key numbers behind the weekend games across the four divisions of the SPFL.

Resident statto @splstats looks at some of the key numbers behind the weekend games across the four divisions of the SPFL.

7 – Aberdeen moved to the top of the Ladbrokes Premiership after a thrilling 4-3 victory over Partick Thistle at Firhill. Derek McInnes’ side have now won seven consecutive Premiership away matches, something the Dons have only previously achieved twice in their history (April - September 1936 and October 1970 - January 1971). The Dons will have the chance to set a new club record when they face Hearts at Murrayfield in a fortnight.  Aberdeen have found the net 25 times in those seven matches, with 10 of the goals coming across their two visits to Firhill.

5 – Rangers defeated Ross County 3-1 at the Global Energy Stadium, with Alfredo Morelos netting a double in Sunday’s victory – the Colombian forward has now scored five goals in his last four matches. It was the Gers’ first league victory over the Staggies; all three previous meetings finished as draws. Pedro Caixinha’s side have preferred playing away from Ibrox of late – they have recorded five consecutive Premiership away wins, compared to one win, one draw and three defeats in their last five at home.

3 – Queen of the South moved up to second place in the Ladbrokes Championship after thumping Falkirk 4-1 at the Falkirk Stadium. Jason Kerr opened the scoring for the Doonhamers but Stephen Dobbie was the hero, scoring his first hat-trick in over eight years to seal the victory. Local boy Calvin Harris was at UK No1 with ‘I’m Not Alone’ the last time Dobbie claimed the match ball – that was in April 2009 when he netted four goals in a 7-1 victory over Clyde. Saturday’s success was Queens’ first victory at Falkirk in 12 attempts; their previous win was a 3-0 triumph back in January 2011.

8 – Raith Rovers climbed to the summit of Ladbrokes League 1 after thrashing local rivals East Fife 5-0 at Bayview. Lewis Vaughan was once more on the scoresheet for Rovers on Saturday; the forward has now scored in eight consecutive matches, banging in a total of 11 goals. The last time Rovers won an away league match by a five-goal margin was over 30 years ago, when they beat East Stirlingshire 5-0 in September 1986 on their way to gaining promotion from the third tier. It has been almost a decade since Raith scored five times in an away league fixture; that came back in April 2008, when goals from Graham Weir (2), Derek Carcary, Robert Sloan and Lee Bryce handed them a 5-2 victory over Berwick Rangers.

10 – Montrose continued their impressive start to the Ladbrokes League 2 season with a 1-0 victory over Annan Athletic at Galabank. The Gable Endies have taken 10 points from their opening four league fixtures, which equals their best ever start to a league season. They also began with three wins and a draw in 1931/32, 1959/60 and 1963/64 but did not manage to gain promotion in any of those three seasons. Montrose supporters will be hoping this is fourth time lucky, and that Stewart Petrie can lead them out of the bottom tier for the first time in 22 years.