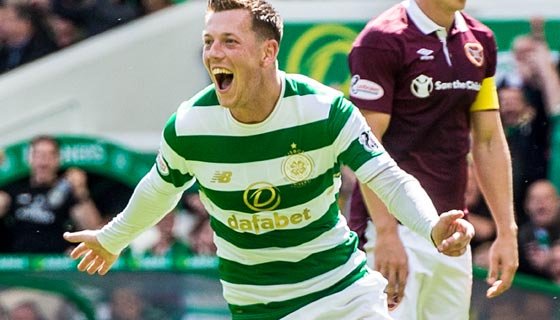 Our resident stat-master, @splstats returns to summarise the opening weekend of the 17/18 Ladbrokes league season, in numbers.

Our resident stat-master, @splstats returns to summarise the opening weekend of the 17/18 Ladbrokes league season, in numbers.

40 – Champions Celtic began the defence of their Premiership title with a 4-1 victory over Hearts at Celtic Park. The Hoops are now unbeaten in 40 top-flight matches, but still have some way to go before they can match their own Scottish record of 62 matches, set between 1915 and 1917. Celtic are now unbeaten in 20 matches against Hearts in all competitions; the Jam Tarts’ last victory over the Bhoys came in the Scottish Cup semi-final back in April 2012.

19 – Hibernian marked their return to the Premiership with a 3-1 victory over Partick Thistle at Easter Road. The Hibees are unbeaten in 19 home matches in all competitions, with their last defeat coming against St Mirren in the IRN-BRU Cup back in October. Returning hero Steven Whittaker scored Hibs’ second goal on Saturday; his last goal for Hibs came over a decade ago, in a 3-3 draw against his future employers Rangers back in April 2007.

11 – St Mirren kicked off their Championship campaign with an impressive 3-1 victory over potential promotion rivals Falkirk at the Paisley 2021 Stadium. Saturday’s victory ended a dismal run of results for the Saints against the Bairns; they had previously gone 11 matches without a victory over Falkirk in all competitions. Their last win over the Bairns came in October 2009, when both sides were in the top flight. On that day, like on Saturday, Saints came from 1-0 down to win 3-1, thanks to goals from Craig Dargo, Billy Mehmet and Tom Brighton.

5 – Ayr United continued their impressive start to the season by defeating Albion Rovers 5-1 at Cliftonhill in their opening League 1 fixture. The Honest Men were one of just three clubs to win all of their Betfred Cup group stage matches, and are now the only club in Scotland with a 100% record in all competitions. Bryan Adams was at number 1 with “(Everything I Do) I Do It For You” the last time Ayr kicked off a season with five straight wins – that was back in 1991/92. Striker Craig Moore netted his first career hat-trick in Saturday’s win, and immediately surpassed his entire 2016/17 league tally – he only netted twice in 13 Championship matches for Ayr last season.

8 – Pre-season title favourites Peterhead kicked off their Ladbrokes League 2 campaign with a dramatic 2-1 victory over Annan Athletic at Galabank. The Blue Toon trailed 1-0 until the 85th minute, but late goals from David McCracken and Jamie Stevenson handed them a winning start to the season. Amazingly, it was Peterhead’s first opening-day victory in eight years; they had drawn four and lost three opening fixtures since beating Clyde on the first day of the 2009/10 Division Three campaign.