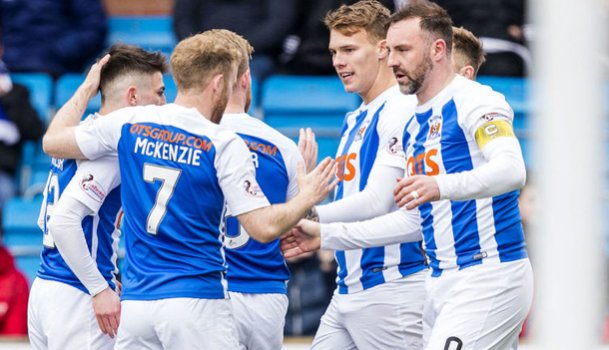 Resident statto @splstats looks at some of the key numbers from the weekend across all four divisions of the SPFL.

Resident statto @splstats looks at some of the key numbers from the weekend across all four divisions of the SPFL.

9 – Kilmarnock kept their hopes of a European place alive with a 2-0 home win over Hamilton Academical. The Ayrshire side are six points behind fourth-placed Hibernian but still have to face the Edinburgh club after the split. Killie are unbeaten in nine Ladbrokes Premiership matches, which equals their best run since they were promoted to the top flight back in 1993. Steve Clarke’s side have picked up eight wins and a draw in their last nine league matches at Rugby Park, with their only dropped points coming in a 2-2 draw with Hibernian. Saturday’s win was their fourth in a row in the league – something they hadn’t previously achieved since May-August 2009.

4 – Hibernian defeated Partick Thistle 2-0 at Easter Road to maintain their challenge for second place in the Ladbrokes Premiership. Hibs are just four points behind Rangers and Aberdeen, who are currently level on points in second place.  The Hibees have recorded four consecutive league wins at Easter Road – John Hughes was in charge the last time they managed this in the top flight, back in October-December 2009. Neil Lennon’s side have suffered just one defeat in their last 12 league matches – that came away to Celtic in January.

11 – Livingston defeated Dumbarton 3-0 at the YOUR Radio 103FM Stadium to move eight points clear of Greenock Morton in the race for second place in the Ladbrokes Championship. David Hopkin’s side are unbeaten in their last 11 league matches, which is their best run in this division since their 2000/01 title-winning campaign. The Lions completed a clean sweep of victories over Dumbarton in the Ladbrokes Championship this season; this is the first time they have won four out of four against the Sons.

22 – Raith Rovers remain three points adrift of Ayr United in the Ladbrokes League 1 title race after leaving it late to beat Albion Rovers 2-0. Raith haven’t lost a league match at Stark’s Park since February 2017, when Morton picked up a 1-0 victory in the Championship.  Rovers have now gone 22 league games unbeaten at home, which is their best run since Jimmy Nicholl presided over a 29-match undefeated sequence between March 1992 and September 1993.

5 – Montrose beat Edinburgh City 3-0 at Links Park to stay level on points with Peterhead at the top of Ladbrokes League 2. Stewart Petrie’s side are behind the Blue Toon on goal difference but crucially have a game in hand at Cowdenbeath on Tuesday. The Gable Endies have recorded five consecutive home league wins for the first time since March-September 1975, when Rod Stewart was at UK No 1 with ‘Sailing’. Montrose have navigated some stormy waters in recent years but if they can pick up 13 points from their remaining five matches they will be docking in Ladbrokes League 1’s port next season.