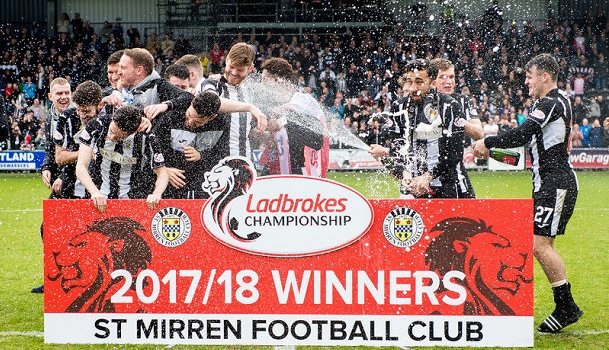 Resident statto @splstats looks at some of the numbers behind the weekend games in the SPFL and Scottish Cup semi-finals&hellip;

1 – St Mirren secured the Ladbrokes Championship title thanks to a 0-0 draw with Livingston at the Paisley 2021 Stadium. Saints will return to the Premiership next season after spending three years in the Championship. This is the fifth time the Buddies have won the second-tier title – they also won it in 1967/68, 1976/77, 1999/00 and 2005/06. Jack Ross and his side have built their success on a strong home record – they have picked up 13 wins out of 16 in Paisley, where their only defeat was 1-0 to Dumbarton in December. Tom Walsh’s goal that day was the last time Craig Samson and his defence conceded a league goal at home - they set a club record on Saturday by recording an eighth consecutive home clean sheet.

6 – Kilmarnock remain in the hunt for a Europa League place after beating Hamilton Academical 2-1 on Saturday. Steve Clarke’s side have now recorded six consecutive wins in the Ladbrokes Premiership and sit four points behind fourth-placed Hibernian with five matches remaining. Killie were defending league champions the last time they managed six top-flight victories in a row – that was between January and February 1966. That run ended with a home defeat to Aberdeen and the Dons will again be Killie’s opponents at Rugby Park this weekend.

2 – Motherwell made it to their second cup final of the season after thumping Aberdeen 3-0 at Hampden in Saturday’s Scottish Cup semi-final. Stephen Robinson’s side were beaten by Celtic in the Betfred Cup final but will have the chance for revenge at Hampden next month.  This is the second time the Steelmen have reached both cup finals in the same season – they also did so in 1950/51, when they beat Hibs 3-0 in the League Cup but lost the Scottish Cup 1-0 to Celtic. Motherwell last won the Scottish Cup in 1990/91 and this will be their first final in the competition since they lost 3-0 to Celtic in 2010/11.

57 – Celtic thrashed Rangers 4-0 at Hampden in Sunday’s second Scottish Cup semi-final to set up another clash with Motherwell in May. The Hoops will be playing in the final for a record 57th time and will be looking to win the trophy for the 38th time. Brendan Rodgers remains on course to lead Celtic to back-to-back trebles, something which has never previously been achieved by any Scottish club. Rodgers continued his unbeaten record against Rangers – he has overseen eight wins and two draws in 10 matches against the Light Blues.

23 – Raith Rovers beat Queen’s Park 2-0 at Stark’s Park to close the gap on Ladbrokes League 1 leaders Ayr United to two points, with two matches remaining. Rovers have the best home record in the SPFL this season – they have earned 15 wins and two draws from their 17 league matches in Kirkcaldy. Their last home league defeat came against Morton way back in February 2017; since then they have gone 23 league matches without a home defeat. Barry Smith’s men are closing in on the club record of 29 unbeaten home league matches, originally set from 1907-1910 and equalled from 1992-1993.

4 – Montrose moved one step closer to securing the Ladbrokes League 2 title thanks to a 1-0 victory over Berwick Rangers at Links Park. The Gable Endies are three points clear of Peterhead and know that four points from their final two matches will secure just the second league title in the club’s history. Stewart Petrie’s side have recorded four wins and four clean sheets in a row but Peterhead have also won four on the trot to set up a thrilling finale.