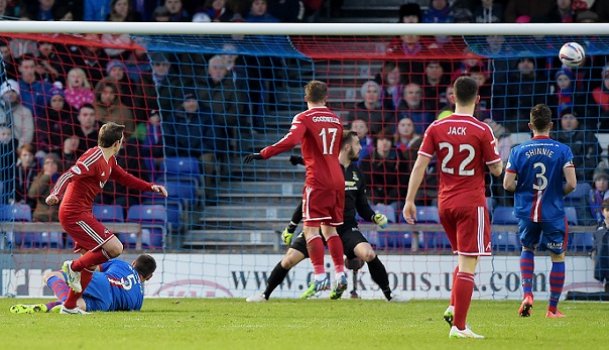 5 Aberdeen's 1-0 win over Inverness on Sunday was their fifth consecutive league victory and moves them to within two points of Celtic at the top of the Premiership table. It's the first time in over 22 years that the Dons have won five league matches in a row – the previous run came in October and November 1992, when Willie Miller's side won seven on the bounce. Derek McInnes' men have not conceded a single goal in those five victories, and have kept seven clean sheets in eight league matches since goalkeeper Scott Brown came into the team.

11,310 Chris Millar's winning goal in St Johnstone's 2-1 success against Dundee United on Saturday was his first league goal in 11,310 minutes of football. Millar's last league goal came in a 4-1 victory over Rangers in March 2010 and his strike on Saturday ended a 139-match drought. Saints have now managed five consecutive league wins, just the fifth time in their history that they have achieved this in the top flight. A win over Aberdeen on New Year's Day would see them record six top-flight wins in a row for the first time ever.

4 Hibernian defeated Rangers 4-0 at Easter Road to move to within four points of the Ibrox side in the Championship. It was the Hibees' biggest winning margin at home since they beat Dunfermline Athletic by the same margin in May 2012 – only Lewis Stevenson and Paul Hanlon played in both matches. “Oh, Pretty Woman” by Roy Orbison was UK No 1 the last time Hibs scored four times against the Gers – that was a 4-2 victory at Ibrox in October 1964.

37 Stirling Albion's incredible 4-3 defeat at home to Morton took the 2014/15 league goal tally at Forthbank to 37 from nine matches, an average of more than four per game. The only ground in the SPFL which has witnessed more goals is Ochilview with 54, and that's only because Stenhousemuir (27 goals) and East Stirlingshire (27 goals) both play there. Tynecastle is the next best, with 35 goals scored there in the Championship. The bad news for the Binos is that they have only netted 11 of those 37 goals, and have yet to record a home victory this season.

13 Elgin City's 3-2 victory away to Montrose was their first league win in 13 matches, and moved them to within two points of East Stirlingshire at the foot of the table. It was just a fourth away league win for the Black and Whites since the start of last season, and bizarrely three of those four wins have come courtesy of a 3-2 scoreline. The last seven matches between the two sides at Links Park have produced 31 goals, with three or more goals scored in each game.