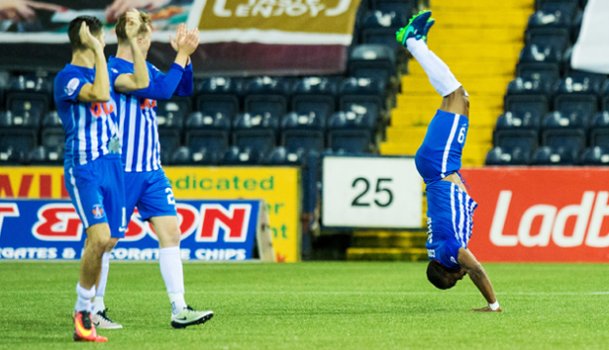 Weekend Ones to Watch

Andy Harrow of The Terrace Scottish Football Podcast explains who he&#39;s tipping to make an impact for their clubs this weekend.

Andy Harrow of The Terrace Scottish Football Podcast explains who he's tipping to make an impact for their clubs this weekend.

Souleymane Coulibaly (Kilmarnock)
Coulibaly had already weighed in with a few goal-of-the-season contenders before his terrific effort against Hearts midweek. His curling finish at Rugby Park on Wednesday night stood up against other spectacular efforts against Hamilton Accies, Dundee and Celtic this season.  More importantly, though, his goals have proved crucial for Lee Clark’s men – their 2-0 win leaves them just a place away from the top six, having picked up seven points from a possible nine in the last three fixtures. With Coulibaly in fine form – and with his ability to conjure up goals out of very little – Killie will be hoping to continue their good run against Rangers at Ibrox this weekend.

Mark Stewart (Raith Rovers)
Mark Stewart made his first league start of the season for Raith last weekend and marked it with two goals and the man of the match award as Rovers notched up an impressive 4-2 win at Falkirk.  Injuries have limited the striker’s appearances this season but he proved to be a real thorn in the side of Peter Houston’s men. He headed in from a few yards out for his first, set up Declan McManus for Rovers’ third and completed his brace to seal the win. Raith take on Queen of the South at Stark’s Park on Saturday – live on BBC ALBA at 5.15pm – and Stewart will be keen to further make up for lost time.

Jamie Lindsay (Greenock Morton)
Following impressive wins over Raith Rovers and Queen of the South, Morton faced Aberdeen in last weekend’s Betfred Cup semi-final high on confidence.  Although they ultimately lost 2-0, the Greenock side were rightly praised for an excellent display at Hampden and, in Jamie Lindsay, they had one of the game’s top performers. The Celtic loanee was up against an experienced Dons midfield but he more than held his own, driving the team on and providing poise and energy in equal measure.  He’ll be looking for a similar display – but a different result – at home to Ayr on Saturday.

Steven Anderson (St Johnstone)
When St Johnstone faced Partick Thistle earlier in the season at Firhill, Steven Anderson popped up with the opening goal in a 2-0 win for the Perth men.  Anderson scored his second goal last weekend at home to Dundee, so the omens might suggest a third of the campaign as Thistle visit McDiarmid Park. However, while goals may be a bonus, the centre-back’s main focus is on not conceding at the other end; a task he’s excelled at in recent seasons. Tommy Wright’s Mr Dependable helped Saints to a point against Rangers on Wednesday as they moved into third in the table, leapfrogging Hearts in the process. A win on Saturday could see Anderson and his team-mates finish the weekend in second place if other results also go their way.