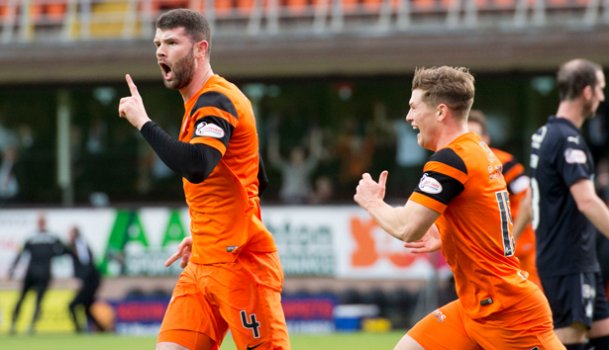 Weekend Ones To Watch

Andy Harrow of The Terrace Scottish Football Podcast talks us through who he thinks will star in this weekend&#39;s round of SPFL fixtures.

Andy Harrow of The Terrace Scottish Football Podcast talks us through who he thinks will star in this weekend's round of SPFL fixtures.

Craig Wighton (Dundee)
Paul Hartley recently praised Craig Wighton as an “outstanding talent” and urged him to establish himself in the first team.  Against Motherwell last time out, Wighton showed why his manager has such faith in him; creating both Dundee goals and proving a thorn in the side of the Lanarkshire men throughout.  Having been on loan at Brechin and Raith Rovers in recent seasons, Wighton has been in and out of the first XI so far this term, but with the arrival of Marcus Haber, he has perhaps found the perfect foil for his game.  The teenager revelled in the space created by his strong, experienced partner against Well and his close control and composure helped set up Cammy Kerr and Haber himself for goals, and was only denied one of his own by a great save by Craig Samson.  An away game at Ibrox could provide further evidence of Wighton’s progress.

Iain Russell (Airdrieonians)
Iain Russell bagged his ninth league goal of the season – his 11th in total – last weekend in Airdrie’s 1-0 victory over Brechin, which helped close the gap on their opponents in the League 1 promotion race.  A summer signing from Queen of the South, Russell always looked a good bet to be a success this season.  A talented wide player with a very respectable Championship scoring record at the likes of Queens and Livingston, the 34-year-old offers Airdrie experience and a real goal threat in the league below.  Russell’s penalty against Brechin was his sixth goal in five games, following strikes against Albion Rovers, Peterhead and a hat-trick of spot-kicks against Queen’s Park.  He faces another promotion challenger this weekend in Alloa, hoping to add to his tally.

Mark Durnan (Dundee United)
Dundee United have only conceded two goals in seven games and have won each of those fixtures.  A key reason for that impressive record is defender Mark Durnan, who has come to the fore over recent weeks with some commanding performances.  He’s helped propel United up the Championship table and they now have their sights set on first place, currently only a point behind Hibs. Not only has he helped keep opposition attackers at bay recently, but Durnan has weighed in with goals at the other end of the pitch. Goals against Queen of the South, Falkirk and Dunfermline have already seen him surpass his record from the entire 2015/16 campaign.  A tough test awaits this weekend as United go to Cappielow, but United – and Durnan – go there high in confidence.

Danny Swanson (St Johnstone)
Danny Swanson has been, arguably, one of the Scottish Premiership’s stars of the season so far. His twinkle-toed performances at the heart of the St Johnstone midfield have kept the Perth side within touching distance of second place and he’s been one of the league’s most effective attacking players.  Not only does he have five goals to him name in the Premiership – including his side’s first against Hearts a fortnight ago – but he’s directly assisted another four; the 2nd-highest tally in the league.  Even when he’s not scoring or assisting, he’s been a constant threat to opposition defences with his intelligent, direct play.  St Johnstone play Ross County at McDiarmid this weekend and Tommy Wright be looking to Swanson to continue his excellent form.