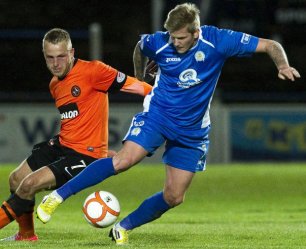 Gibson joins up with McMenamin just over the border

Winger Willie Gibson, who left Queen of the South at the end of last season, has joined up with former Doonhamer Colin McMenamin at ambitious English Northern League Division One side Celtic Nation who are based in Carlisle.

The 29-year-old started and ended his senior career at Palmerston, with stops at Kilmarnock, Dunfermline Athletic, Crawley Town, St Johnstone and Falkirk in between.

Gibson joins up with former Gretna manager Mick Wadsworth and a whole host of signings from English clubs that play in higher leagues.