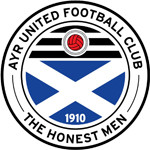 The Ayrshire derby between Kilmarnock and Ayr United on the opening weekend of the cinch Championship season will be shown live on the BBC Scotland channel.

It will be the first league meeting of the teams since 1992/93, when both were in Division 1.