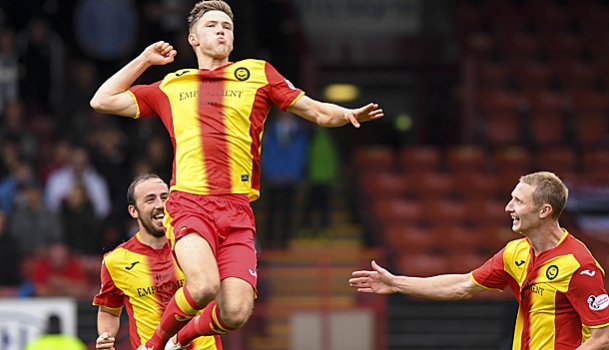 There were goals galore on matchday three of the Betfred Cup on Saturday, with Partick Thistle, Dunfermline and Albion Rovers all scoring five.

There were goals galore on matchday three of the Betfred Cup on Saturday, with Partick Thistle, Dunfermline and Albion Rovers all scoring five.

The Jags thrashed St Mirren 5-0 at Firhill, helped by doubles from Blair Spittal and Stevie Lawless, while Declan McManus and Joe Cardle both netted twice as Dunfermline saw off Peterhead 5-1 at East End Park.

Connor Shields came off the bench to grab a hat-trick as Albion Rovers notched up a 5-2 victory over East Kilbride at K-Park. Kyle Lafferty bagged a brace as Hearts beat East Fife 3-0 at Tynecastle and Louis Moult was on target as Motherwell defeated Morton 4-0 at Fir Park.

Kris Boyd got both goals as Kilmarnock won 2-0 at Annan and Clyde came from behind to defeat Dumbarton 2-1 in the same section. Danny Denholm's double helped Arbroath coast to a 4-0 derby win against Montrose at Gayfield.

Falkirk are in control of Group A after winning 2-0 at Inverness CT and Livingston continued their great start by beating Airdrieonians 2-0 to lead Group H.

Dundee beat Buckie Thistle 2-0 at Dens Park while Hamilton Accies won the day's only penalty shoot-out after a 1-1 draw with Queen of the South at the SuperSeal Stadium.