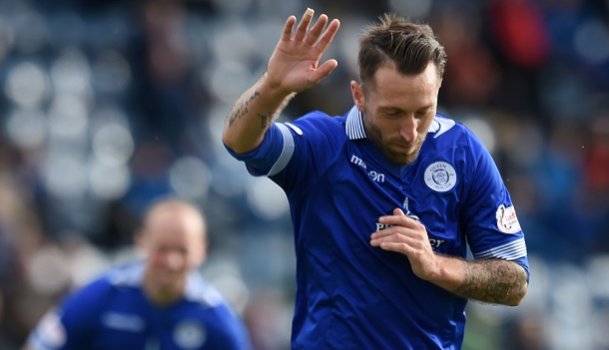 Championship Team of the Year

Craig Fowler selects his Championship Team of the Season for 2016/17, with Queen of the South striker Stephen Dobbie earning star-man status.

Craig Fowler selects his Championship Team of the Season for 2016/17, with Queen of the South striker Stephen Dobbie earning star-man status.

GK - Sean Murdoch (Dunfermline Athletic)
Outstanding campaign from the Pars shot-stopper, who had several man-of-the-match performances as Dunfermline finished fifth in the table. Allan Johnston will be looking to upgrade a few positions next term as they aim to make the play-offs but goalkeeper is one spot he does not have to worry about.

DR - Nicky Devlin (Ayr United)
Devlin was one of the bright spots for an Ayr United side who started promisingly enough but would eventually fall into a mid-season funk that they never truly roused themselves out of. The right-back was a menace to opposing teams down the wing, as he used his blistering pace to get to the line time and again.

DC - Thomas O'Ware (Morton)
Having been used between midfield and defence for much of last season, O'Ware was positioned mainly in the backline this term and the results were there for all to see. Not only did he help hold the unit together, even through player departures and injuries, he also chipped in with an impressive six league goals, and over double figures in all competitions.

DC - Darren McGregor (Hibernian)
It was fitting that on the day Hibs confirmed the Championship crown and their return to the top flight, it was McGregor who netted an early double to erase any potential jitters. The boyhood fan was a colossus at the back for Neil Lennon's men all season and was harshly omitted from the Player of the Year shortlist.

DL - Lewis Stevenson (Hibernian)
Hibernian's Mr Reliable took it up a notch this year, excelling in just about every game down the left-hand side of the Hibs defence. After it was all said and done, it was Stevenson, and not the more high-profile John McGinn or Jason Cummings, who was named the club's Player of the Year.

MR - Ross Forbes (Morton)
Nine goals and nine assists is a terrific haul for a midfielder, as Forbes enjoyed his most productive season in years as the creative muse in Morton's promotion push. Had his form not drifted off slightly towards the end of the campaign, he would have been the star man of this team.

MC - Tony Andreu (Dundee United)
Another player whose form faded a little as the campaign drew to a close, Andreu was the major attacking threat for United for the majority of the campaign - which may explain him wearing down a little. He netted 13 goals as United qualified for the play-offs and almost got themselves back to the top flight at the first time of asking.

MC - Stevie Mallan (St Mirren)
The opposite of Forbes and Andreu, Mallan had a slow start to the season, but he was incredible in the second half of the campaign as St Mirren rose from the dead to avoid relegation. Quite simply, the guy can run games on his own when he's on form, while he's also a scoring threat from anywhere inside 30 yards. Seven league goals and 12 assists are a testament to his talents.

ML - Craig Sibbald (Falkirk)
Switching between playing in the centre of the park and the left of midfield, Sibbald shone for Falkirk throughout the season. The creative midfielder scored 10 league goals (ranking as the club's top goalscorer) and helped dictate attacking play from the midfield area.

FC - Jason Cummings (Hibernian)
The Hibs striker banged in 19 league goals across the campaign, ultimately leading the division in the goals-per-minute ratio with a strike every 120 minutes. It's always interesting to see a Championship striker adapting to the top flight, but you have to feel confident the cocksure hitman will hit the ground running.

FC - Stephen Dobbie (Queen of the South)
He scored the same total as Cummings and did it in more time (159 minutes per goal), but it's easy to argue that the veteran striker had less help around him to reach that figure. Often opposing teams would gear up just to stop Dobbie, and on many occasions they would find themselves powerless to execute such a game-plan. He was arguably the league's most valuable player, and gets this team's star man as a result.