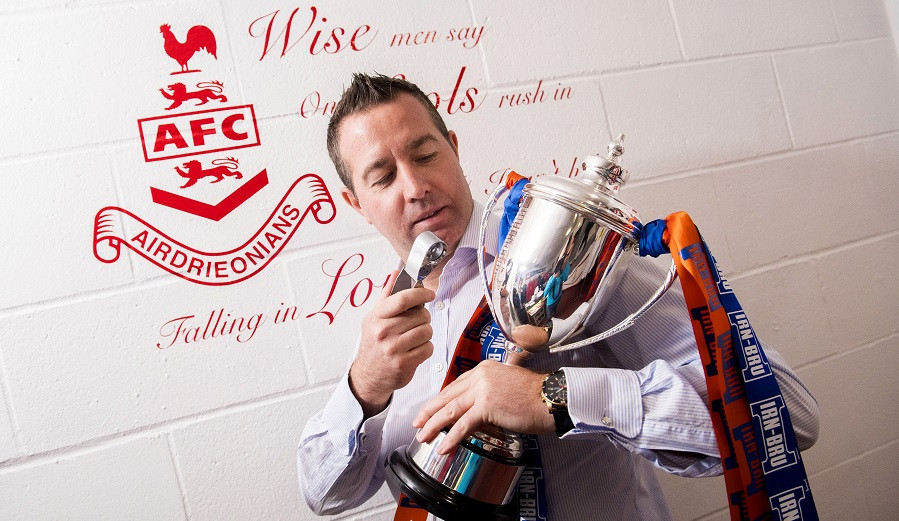 There are 15 more second-round games on Saturday, including eight cross-border clashes.

Airdrieonians v Sutton United - Penny Cars Stadium, kick-off 3.00pm
The Diamonds won 3-0 at Berwick Rangers in round one and now host National League Sutton United, who have suffered only one league defeat so far this season.

Arbroath v Annan Athletic - Gayfield Park, kick-off 3.00pm
The League 1 leaders beat Elgin City on penalties in the first round and again face League 2 opposition in Annan Athletic, who saw off Celtic Colts 4-0 at Galabank in their opening tie.

Boreham Wood v Dunfermline Athletic - Meadow Park, kick-off 1.00pm
Dunfermline knocked out holders Inverness CT in round one but have hit a dip in form and are up against a Boreham Wood side with three wins and two draws in five National League games at home this season.

Coleraine v Formartine United - The Showgrounds, kick-off 7.45pm
Formartine knocked out Highland League rivals Inverurie Locos in round one and now head across the water to play Northern Irish league leaders Coleraine, with an evening kick-off due to Northern Ireland's match with Bosnia in the afternoon.

East Fife v Partick Thistle - Locality Hub Bayview Stadium, kick-off 3.00pm
East Fife came from behind to beat Cowdenbeath 3-1 in the first round while Thistle thumped Stranraer 5-0 at Stair Park and will be hoping for another success on the road.

Falkirk v Connah’s Quay Nomads - Falkirk Stadium, kick-off 3.00pm
The Bairns have won this trophy four times and beat Rangers Colts 2-1 at Forthbank in round one. Ray McKinnon's men host Welsh side Connah's Quay, who were beaten by Dumbarton 12 months ago.

Peterhead v Bohemians - Balmoor Stadium, kick-off 3.00pm
The Blue Toon knocked out Brechin City in round one and again have home advantage against their opponents from Dublin. Bohemians are seventh out of 10 in the Irish Premiership after 30 rounds of fixtures.

Queen of the South v Crusaders - Palmerston Park, kick-off 2.30pm
Queens beat Stenhousemuir 3-0 at Ochilview in round one and SPFL top scorer Stephen Dobbie has already rattled in 18 goals this season. Belfast-based Crusaders are seventh in the 12-team table after five fixture rounds in Northern Ireland.

Ross County v Raith Rovers - Global Energy Stadium, kick-off 3.00pm
The Staggies are top of the Championship and Rovers, who have Kevin Cuthbert in temporary charge after the departure of Barry Smith, are second in League 1. Both clubs are former winners of this competition.

St Mirren Colts v Hamilton Academical Colts - Simple Digital Arena, kick-off 3.00pm
It's an all U21-clash in Paisley and the sides meet again in a Reserve Cup game on Monday. Saints beat Kilmarnock Colts in round one while Accies got the better of Clyde.

Sligo Rovers v Livingston Colts - The Showgrounds, kick-off 7.45pm
Sligo, third from bottom in the Republic of Ireland, play host to the Livingston U21 side, who defeated Forfar on penalties at the Tony Macaroni Arena in the first round.

The New Saints v Queen’s Park - Park Hall Stadium, kick-off 7.35pm (Live on S4C)
The Welsh champions are top of their domestic table after three wins from four. They were knocked out by Dumbarton last season and their latest SPFL opponents are a Queen's Park team who upset Ayr United on penalties in round one.