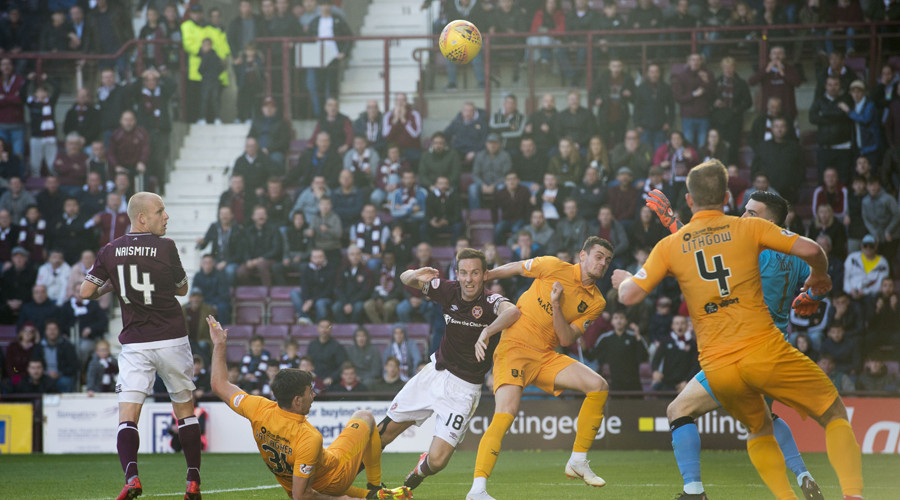 Hearts were held to a 0-0 draw by Livingston but ended the weekend five points clear at the top of the Ladbrokes Premiership. Liam Kelly saved a Steven Naismith penalty as Livi frustrated the leaders to keep up their excellent run of results.

Florian Kamberi got the opener for Hibernian as they defeated bottom club Dundee 3-0 at the Kilmac Stadium at Dens Park while James Wilson scored the only goal as Aberdeen edged out Motherwell 1-0 at Pittodrie. Mickel Miller bagged a double as Hamilton Accies saw off St Mirren 3-0 at the Hope CBD Stadium.

Ayr United moved to the top of the Ladbrokes Championship with a 2-0 win at Alloa thanks to a Lawrence Shankland double while it ended 0-0 in the Highland derby between Ross County and Inverness CT in Dingwall. Dundee United were 2-0 winners at bottom side Falkirk and it was 1-1 between Morton and Dunfermline Athletic at Cappielow. Blair Spittal scored twice in Partick Thistle's 3-2 home win over Queen of the South.

Arbroath increased their lead at the summit of Ladbrokes League 1 to four points after hitting back to win 2-1 at Stenhousemuir while second-placed Raith Rovers were held to a 1-1 draw by Montrose at Stark’s Park. East Fife are up to fourth after a 2-0 victory at Stranraer and there were 1-1 draws between Forfar Athletic and Brechin City and Airdrieonians and Dumbarton.

It was a good day for the leading sides in Ladbrokes League 2. Edinburgh City stay two points clear at the top after beating Queen's Park 2-0 at Hampden with a Graham Taylor double. Peterhead defeated Berwick Rangers 1-0 at Balmoor and Clyde dismissed Elgin City 4-1 at Broadwood. Annan Athletic beat Stirling Albion 2-1 at Forthbank and Albion Rovers picked up their first point in a 1-1 draw at Cowdenbeath.