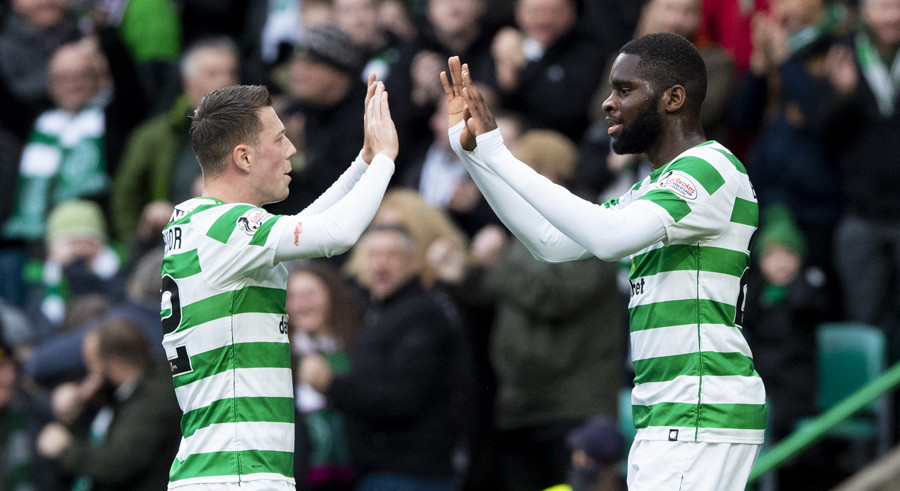 Celtic thrashed Ladbrokes Premiership leaders Heart of Midlothian 5-0 to move to within a point of Craig Levein's side. Odsonne Edouard scored twice for the Hoops, with Filip Benkovic, James Forrest and Ryan Christie also on target.

Rangers are in second spot after late goals from Daniel Candeias and Alfredo Morelos earned them a 2-0 win at St Mirren. Joe Shaughnessy scored in the last minute as St Johnstone beat Hibernian 1-0 at Easter Road to make it four straight wins. David Turnbull got the only goal as Motherwell defeated bottom club Dundee 1-0 at Fir Park and Mason Bloomfield struck late on as Hamilton Accies edged out Livingston 1-0 at the Hope CBD Stadium.

Ayr United now have a three-point advantage at the top of the Ladbrokes Championship after a 1-0 victory at bottom club Falkirk thanks to a Craig Moore goal while closest challengers Ross County drew 2-2 away to Inverness CT in the Highland derby. Dundee United defeated Queen of the South 2-0 at Tannadice and Morton are fourth after thumping Partick Thistle 5-1 at Cappielow. Dunfermline Athletic were 1-0 winners away to Alloa Athletic.

Arbroath remain unbeaten and seven points in front in Ladbrokes League 1 thanks to a 1-0 win over East Fife at Gayfield with a Michael McKenna goal while second-placed Raith Rovers beat Brechin City 2-1 at Stark’s Park with a Kevin Nisbet double. Fourth-placed Forfar Athletic defeated Airdrieonians 1-0 at the Penny Cars Stadium and Stranraer were 2-0 winners at Stenhousemuir. Dumbarton are bottom of the table after losing 1-0 to Montrose at Links Park.

Peterhead are the new leaders in Ladbrokes League 2 after a 2-1 home win against bottom club Albion Rovers as Edinburgh City were knocked off the summit following a 1-0 home defeat to Clyde. Elgin City came from behind to beat Cowdenbeath 2-1 at Central Park and Stirling Albion saw off Berwick Rangers 3-0 at Forthbank. Queen's Park and Annan Athletic drew 0-0 at Hampden Park.