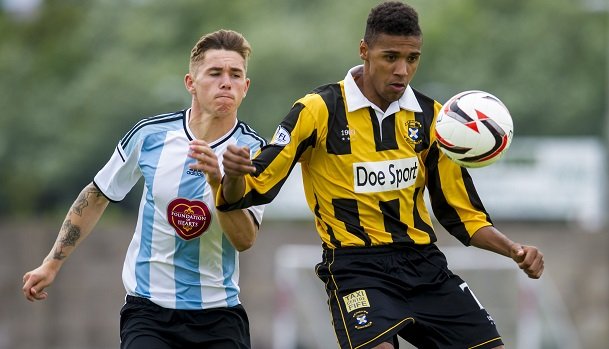 Three wins in their last four games helped Easy Fife seal a top-four finish in League 2 and they now face Stenhousemuir in the play-off semi-finals.

Three wins in their last four games helped East Fife seal a top-four finish in League 2 and they now face Stenhousemuir in the play-off semi-finals.

Local lad Nathan Austin has enjoyed a good second season in senior football, scoring 14 goals – including a quartet in a 5-3 win at Elgin back in March.

What is the best goal you have ever scored?
I have not scored that many good ones but I will pick the fourth goal from up at Elgin earlier in the season. A ball was played over the top and I did a step-over to get away from a defender then smashed it home. It was a big goal in the game as they had just scored to get back to 4-2 with a strong wind at their backs.

What is the best game you have played in?
That was last year when we went to Dunfermline and won a Fife derby 2-1. It was a big game as we were looking to avoid relegation trouble and I scored the winner.

What is your favourite away ground?
It is Hampden, where I played earlier this year against Queen’s Park. I will choose it even though it was not a great afternoon for me as I was sent off and we lost!

What is your favourite other sport?
Probably golf although I do not play that often. I get a few games in during the summer but I am not that good at it.

Which player in the world would you like to play alongside?
I will go for Cristiano Ronaldo, just ahead of Lionel Messi.

What is your favourite pre-match meal?
I like some scrambled eggs on toast with a small amount of bacon on top.

Who is the biggest moaner you have played with?
Liam Buchanan, who I played with last season at East Fife. Even in training he was moaning - if he kicked the ball out of the box we were training in he would moan at somebody about it!

Who has been your most skilful team-mate?
There was a French player with us last season called Cedric Tuta and he was full of tricks. He was really skilful however he never played in that many games and went back home.

Who is your worst dressed team-mate?
I would have to say that Kevin Smith is a pretty boring dresser – good player, bad dresser.

Who is the best trainer?
Lewis Barr is a machine who just never stops in training.

Who is the best dancer?!
Me, definitely me!

Referees for Premiership play-off final 1994 prices for landmark Clyde game Survey - Have your say on the future Boyle completes Hibs switch Who is your hat-trick hero? Win the chance to co-host SPFL Extra! Player of the Month - Be Part of the Judging Panel! Show Racism the Red Card Topps link up with Motherwell Fixture amendment