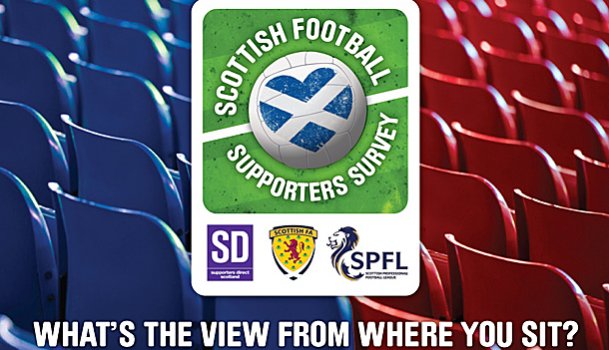 Survey - Have your say on the future

Supporters Direct Scotland, in partnership with the Scottish FA and supported by the SPFL, are pleased to launch the Scottish Football Supporters Survey 2016 – designed to give supporters across the country their say on the big issues affecting the national game.

This year’s survey is expected to engage tens of thousands of supporters, with clubs supporting the call to ask fans, “What’s the view from where you sit?”

Since its inception, the Scottish Football Supporters Survey has helped shape strategy and facilitate change at all levels of the game.

Your feedback is essential in the next stage of supporter engagement and to help provide a better fan experience whether supporting your club or country.

Already, your views have been taken on board and helped achieve the implementation of innovations such as:

• The creation of a single league body, the SPFL
• The creation of the Premiership Play-Offs
• The appointment of SDS and other independent groups (Players, Coaches and Referee Representatives) to the Scottish FA Congress
• The reformatting of the League Cup

In addition, the survey feedback has also enhanced the debate on the fixture calendar, pricing strategy, barriers to attendance, alcohol in football and fan engagement and ownership models.

How will your views count?

He said: “We are delighted to work in partnership with the SPFL and SDS to launch this year’s Scottish Football Supporters Survey. The Scottish FA is committed to improving the game at all levels and the feedback from the fans – the lifeblood of the game – is important in shaping our plans for the future.”

Head of Supporters Direct Scotland, Andrew Jenkin, explained that the survey is part of a process to continue to deliver change.

“As an organisation, Supporters Direct Scotland, plays a vital role in influencing key issues for supporters in Scottish football,” he added.

“This year we are more ambitious than ever before and plan to present the findings to all supporters, and then identify the key “supporter asks” we think Scottish football as a whole should focus on. Our aim is to be collaborative, to represent supporter views clearly, and to work with governing bodies & clubs to deliver ongoing change.”

SPFL chief executive Neil Doncaster added that the survey provides a valuable opportunity for the league governing body to reflect on the views of supporters across the country.

“The SPFL welcomes this survey and the opportunity it provides to hear and take on board the views of Scottish football supporters around the issues of most interest and concern to them,” he said.