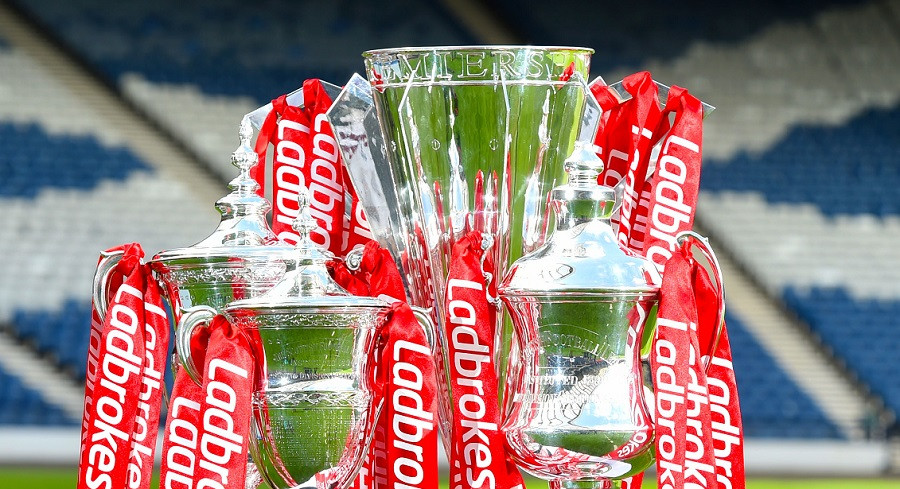 The SPFL is gearing up for a mammoth weekend of action, with Celtic closing in on the Ladbrokes Premiership title and lots at stake on the final day of the Championship, League 1 and League 2...

A draw against Aberdeen in the Saturday lunchtime kick-off at Pittodrie would put Neil Lennon’s team out of reach of closest challengers Rangers and earn Celtic their eighth title in a row.

Ross County were presented with the Ladbrokes Championship trophy on Friday after sealing an immediate return to the top flight while Dundee United, Ayr United and Inverness Caledonian Thistle have all booked play-off spots. There is an incredible four-way relegation battle with two of those four clubs – Queen of the South and Partick Thistle – in direct opposition at Palmerston. Bottom side Falkirk prepare to host Ross County and ninth-placed Alloa Athletic go to Ayr United.

Ladbrokes League 1 champions Arbroath will receive the trophy after Saturday's match against Dumbarton at Gayfield. Dick Campbell's team, who won League 2 two years ago, secured the title with a 1-1 draw at local rivals Brechin City on April 13 and are looking forward to Championship football next season for the first time since 2002/03.

Forfar Athletic, Raith Rovers and Montrose – who are seeking a second successive promotion – will take part in the promotion play-offs, whilst there is a relegation decider between bottom club Brechin City and ninth-placed Stenhousemuir at Glebe Park.

The destiny of the Ladbrokes League 2 trophy will be decided on Saturday. Peterhead came within 30 seconds of winning it at Balmoor last weekend until Stirling Albion equalised in stoppage time but Jim McInally’s team have another chance when they play Queen’s Park at Hampden Park.

A victory will guarantee the Blue Toon the silverware and they will be presented with the trophy at the National Stadium if successful. Clyde are also in contention – Danny Lennon’s side are two points and five goals behind, meaning a victory against Cowdenbeath at Central Park and a Peterhead defeat, or a big win for Clyde and a draw at Hampden, would see the Bully Wee promoted. If Clyde top League 2, they and their supporters will head back to Broadwood to receive the trophy on Saturday evening and celebrate their first title since becoming Second Division champions in 1999/00.

Elsewhere in Ladbrokes League 2, Edinburgh City and Annan Athletic have already clinched promotion play-off places while Berwick Rangers will face a play-off with Cove Rangers or East Kilbride as they bid to retain their SPFL status.

There are three more awards at stake this weekend as we find out the winners of the inaugural Ladbrokes Championship, League 1 and League 2 Tartan Ball top scorer awards.

Edinburgh City striker Blair Henderson and Raith Rovers forward Kevin Nisbet each have 30 league goals going into the last round of fixtures in League 1 and League 2. They are also in the running to win the Tartan Boot – awarded to the overall top scorer across all four divisions – which will be confirmed following the conclusion of the Ladbrokes Premiership season.

Meanwhile, Ayr United’s Lawrence Shankland and Queen of the South forward Stephen Dobbie look most likely to lift the award in the Championship, with 23 and 21 goals respectively.

Neil Doncaster, SPFL chief executive, said: “We are looking forward to a thrilling final afternoon of action across three divisions of the Ladbrokes SPFL. I would like to congratulate Ross County and Arbroath on their title success this season and wish Peterhead and Clyde all the very best as the Ladbrokes League 2 race goes to the last day for the third year in a row.”