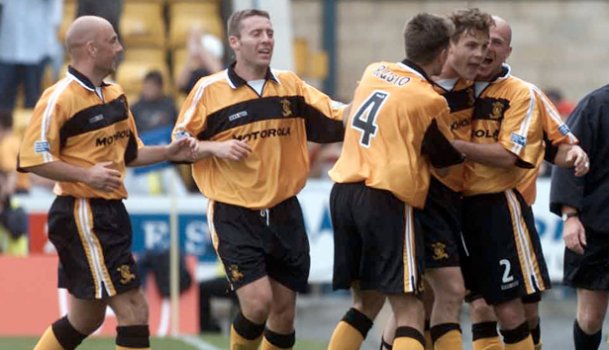 Neil Sargent looks back at the traditional black &amp; gold of Livingston as they soared to the heights of Scottish football in the early noughties.

After a series of name changes and stadium moves, 2001-02 was the season when Livingston announced themselves as a major player in Scottish football.

Since being founded as Ferranti Amateurs in 1943, the club that would eventually become Livingston had a fairly turbulent and nomadic existence. Edinburgh-based Amateurs became Ferranti Thistle in 1948 and were admitted to the Scottish Football League in 1974, replacing Third Lanark. However, their name (taken from the name of the Ferranti Engineering Company) was deemed to breach the rules on sponsorship, and their ground was declared unfit for senior football.

Despite the change of stadium, a new name and a new badge, the club stayed faithful to the traditional colours of their predecessors, adopting black and gold for their kits. Wearing a gold top and black shorts, they were promoted to the top flight for the first time in their history as they beat Ayr United to the First Division title in 2000-01.

As Livi prepared for their first ever season in the top division, they switched kit manufacturers from Russell Athletic, who had made the kit every year since the move to West Lothian, to Jerzees. The design, however, continued to remain faithful to tradition, with a gold top, black shorts and gold socks. The strip had a black hoop across the chest (referencing the hooped jerseys worn by Ferranti from 1943) upon which sat the badge and the manufacturer’s logo. The kit sponsor was Motorola, who had a strong presence in the town due to its plant there.

If the club was inexperienced at the highest level they didn’t let it show on the park, holding both Rangers and Celtic to 0-0 draws in the opening weeks and losing just one match in all competitions in their first 13 games. Highlights included a 5-1 win over Kilmarnock at Rugby Park, a 2-1 home win over Hearts and a stunning 6-1 victory over Aberdeen at Pittodrie in the League Cup. By the turn of the year, Jim Leishman’s side sat third in the table and had built up a seven-point advantage over fourth-placed Aberdeen.

After Christmas, however, their form dipped and Aberdeen clawed back the gap, leaving the Lions trailing by three points with four games to go and second-placed Rangers up next to visit Almondvale Stadium. The game went down in Livi folklore as Stuart Lovell scored a sensational overhead kick in the last minute to make the score 2-1 and give them their first win in nine matches, putting them right back in contention for third place.

Two wins in their final three games proved enough as Aberdeen lost to both Rangers and Celtic. Amazingly, in their first ever season in the Premier League, Livi had finished ‘best of the rest’ and qualified for the UEFA Cup. It was quite an achievement for a club who had only existed in their present form since 1995, and for many it served as evidence that the decision move to West Lothian had been the right one.