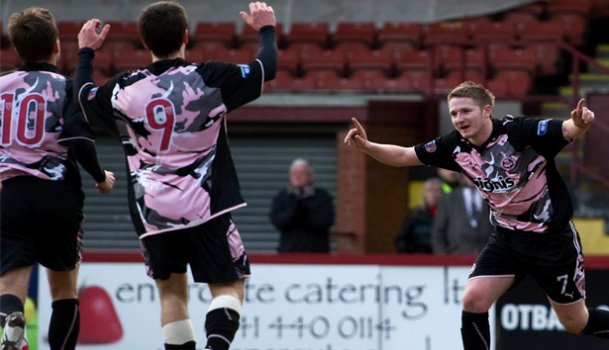 Nowadays, pink football strips are everywhere. Stars like Cristiano Ronaldo and Gareth Bale have played in them at Real Madrid; Everton, Sunderland and Bournemouth are among the sides to wear them in the English Premier League; both Celtic and the Scottish national team currently have bright pink away kits.

Less than a decade ago, however, pink was still a fairly unfashionable colour in the football world. When Partick Thistle became the first domestic side in the UK to unveil a pink top (with grey stripes and grey shorts) in 2008 it created headlines across the country, with many stories focusing on the embarrassment the players might feel playing in it.

Despite the media attention, though, pink strips weren’t actually anything new in Scottish football. Indeed, the men’s national team had worn pink strips on several occasions going as far back as the 1880s when they often turned out in the pink and yellow colours of their patron Lord Rosebery, and more recently had played in pink away kits in both 1993 and 1999.

Nevertheless, the move was a bold one from manufacturers Puma and retailers Greaves Sports, who collaborated on the design. Greaves claimed at the time that the strip was the most commercially successful Thistle kit ever, and set about thinking of ways that they could top it the following season.

The end result was one of the most memorable kits in Scottish football history - a pink ‘camouflage’ design with splashes of grey, black and white that quickly became headline news again after it was modelled for the first time at Firhill in August 2009.

Those behind the creation were happy to admit publicly that it was designed to provoke a reaction and get people talking. After the success of the pink and grey-striped away kit they were hoping to create a similar buzz around the new kit, and it certainly worked!

Interestingly, though, the ultra-modern design had to share the limelight that season with another Thistle outfit which could hardly have been more different. A month after the launch of the pink camouflage design, the club also launched a special centenary kit to mark 100 years at Firhill Stadium. It was based on the navy strip worn by the team from 1909 to 1935, before the switch to yellow and red, and was about as traditional as they come.

The dark blue tops and socks with white shorts and a large white thistle emblem on the chest looked similar to something the Scotland rugby team might wear. The club unveiled it to the media on the 18 September 2009 - 100 years that day since their first match at Firhill - and wore it for the first time the following day in their 2-0 home win over Dunfermline in the First Division.

While the Jags’ fashion sense continued to make headlines off the park, on the pitch the season was a less memorable one. The team finished sixth in the First Division, 15 points clear of the relegation zone but 25 points behind champions Inverness Caledonian Thistle. The strip was worn sparingly, featuring in a handful of matches including a 2-0 win over Airdrie at Firhill in February 2010.

Nevertheless, it will always be remembered much more for its impact off the field. The pioneering design had opened the floodgates and pink tops exploded on to the scene right across the UK, and indeed the world. While the camouflage design itself turned out to have limited appeal on the global stage, the colour scheme has become hugely popular throughout world football, while Thistle themselves have continued the trend, having since had a number of different away kits featuring pink, including in 2012-13 and 2014-15.