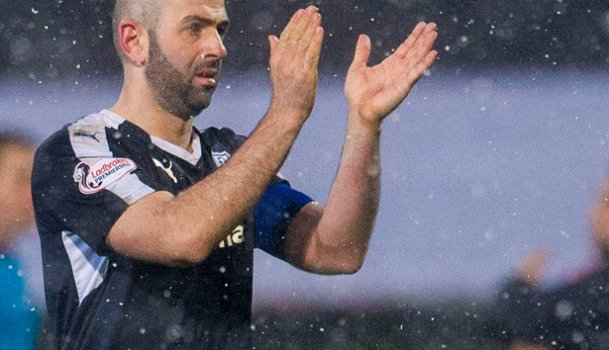 Gary Harkins was handed the captain's armband for Dundee on Saturday and boy did he rise to the occasion.

He scored two and played a key role in setting up the other two in his side's 4-2 win at Firhill. For those reasons, he has been picked as star man in SPFL Team of the Week.

GK – Jordan Millar (Montrose)
The on-loan St Johnstone shot-stopper made several key saves as Montrose nicked a point from their visit to Queen's Park. This included a couple of one-on-ones and a penalty.

DR – Shay Logan (Aberdeen)
The right-back continued to attack into the opposing penalty area despite his side being down to 10 men for most of their match at Ross County. This paid off as he forced one goal and scored another in the 3-2 win.

DC – Peter Grant (Falkirk)
The young centre-back was solid in his side's 1-1 draw with Hibernian as they kept up their title challenge in front of the BT Sport cameras.

DC - Efe Ambrose (Celtic)
The centre-half was excellent in the Friday night win at Dundee United. He displayed terrific awareness and anticipation to snuff out a number of promising attacks.

DL – Igor Rossi (Hearts)
The Brazilian is recognised as the safer option at left-back for Robbie Neilson's side, but he showed himself to be adept with the ball in Hearts' 6-0 win over Motherwell. He rarely wasted possession, picked out a number of good balls and even netted the opening goal.

MR – Arnaud Djoum (Hearts)
The midfielder helped create two goals before winning the penalty for his side's sixth. The skills he produced to bamboozle two defenders before drawing the spot-kick were absolutely outstanding.

MC – Gary Harkins (Dundee)
The midfielder was given the captain's armband for the trip to Thistle and boy did he rise to the occasion. Harkins netted two and set up the others in Dundee's 4-2 away win. He is this week's star man.

MC – Craig Slater (Kilmarnock)
His team-mate Jamie Hamill could easily have earned a spot in this team, but Slater beats him out for a tremendous half volley that won the game for Kilmarnock against Inverness CT.

ML – Barrie McKay (Rangers)
Another top-drawer performance from the winger whose confidence is sky high at the moment. His direct approach is a nightmare for defenders to deal with, and every time he touched the ball in Rangers' 4-1 win over Livingston it seemed like it would lead to a chance.

FC – Shane Sutherland (Peterhead)
The attacker netted twice as Peterhead turned in a five-star performance to thump Stranraer 5-1 away from home.

FC – Leigh Griffiths (Celtic)
The striker is deadly in front of goal. Once more against Dundee United he demonstrated that if the opposition are willing to give him an inch, he will take a mile, netting twice in the 4-1 win.