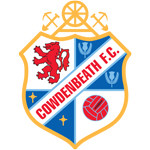 A View From the Terrace's Craig Fowler selects his SPFL Team of the Week, with Rangers striker Jermain Defoe the star man...

GK - Maciej Dabrowski (Cowdenbeath)
The big goalkeeper has impressed since going on loan from Hibs and turned in another solid display to ensure the Blue Brazil took all three points from Saturday's clash against Stirling Albion in Ladbrokes League 2 with a 1-0 win at Central Park.

DR - Cammy Kerr (Dundee)
Dundee won their home opener on Saturday by a goal to nil thanks to a late introduction from Andrew Nelson. It wasn't the most convincing of displays against Ayr United but Kerr excelled for most of the match with his runs from deep.

DC - Shaun Rooney (Inverness CT)
This entry is a bit of a cheat as Rooney played right-back for Inverness on Saturday. The hosts defeated Arbroath despite losing an early goal as Miles Storey rose from the bench to net a late winner. Similar to Kerr, Rooney was one player who consistently played well across the 90 minutes thanks to his marauding runs.

DC - Sam Stubbs (Hamilton Accies)
The no-nonsense defender was imperious at the heart of the Accies defence as they bounced back from an opening day defeat to beat Kilmarnock 2-0.

DL - Jamie Robson (Dundee United)
It's two wins out of two from Dundee United to start the Ladbrokes Championship season as Robbie Neilson's men fought back from a half-time deficit to defeat Partick Thistle on Friday night. Robson's attacking impetus was key in the second-half turnaround.

MC - Olivier Ntcham (Celtic)
The Frenchman showed he can still be a key contributor to the Celtic team with a stand-out showing at Fir Park in the early kick-off on Saturday. The midfielder was instrumental in the 5-2 victory that keeps Celtic top of the Ladbrokes Premiership.

MC - Sam Foley (St Mirren)
Both former Northampton Town man Foley and Ryan Flynn impressed on Sunday as St Mirren won their first home match of the new campaign, defeating Aberdeen 1-0 in Paisley. The energy, hard work and running of the central midfield pairing was a key factor in the win.

MC - Regan Hendry (Raith Rovers)
The former Celtic youngster had two assists, converted a penalty and completely controlled the middle of the park during Raith Rovers' 5-2 victory over Clyde in Ladbrokes League 1.

FC - Jermain Defoe (Rangers)
Rangers hit Hibs for six on Sunday afternoon with Defoe grabbing himself a hat-trick in the hammering. He is this week's star man.

FC - Bob McHugh (Greenock Morton)
Morton ran out 4-1 winners at home to Alloa, thanks in large part to McHugh being one of three strikers to net himself a week two hat-trick.

FC - Declan McManus (Falkirk)
The Bairns piled misery on Dumbarton, who were another club to suffer a six-goal shellacking, this time without reply. Crucially denying team-mate Conor Sammon a place in this side, McManus went one better than his two-goal pal by hitting a hat-trick.