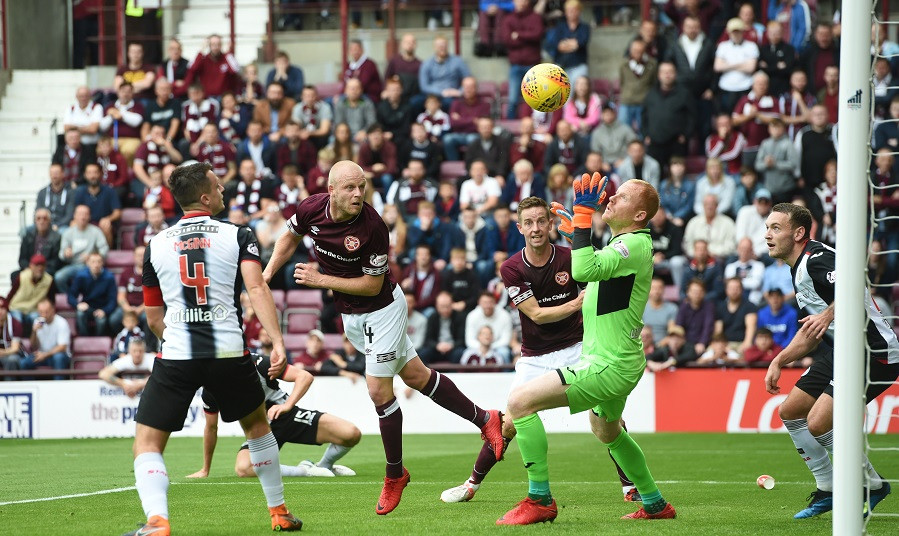 4 – Heart of Midlothian defeated St Mirren 4-1 at Tynecastle to continue their perfect start to the Ladbrokes Premiership season. The Jam Tarts have picked up four wins out of four and are the only club in the SPFL with a 100% record. Craig Levein’s side have recorded seven consecutive victories in all competitions, which is their best run since winning the opening seven matches of the 2015/16 campaign. Steven Naismith was Hearts’ hero on Saturday, netting a first-half hat-trick to put the game beyond Saints. It was the third hat-trick of Naismith’s career – the first came for Kilmarnock in a 3-0 League Cup semi-final win over Falkirk in 2007 while his second came in Everton’s 3-1 win against Chelsea in 2015.

12 – Celtic moved up to second in the Ladbrokes Premiership thanks to a 1-0 victory over Rangers at Celtic Park. The Hoops are now unbeaten in 12 matches against their Glasgow rivals, picking up 10 victories and two draws since losing on penalties in the 2015/16 Scottish Cup semi-final. Brendan Rodgers has now beaten four different Rangers managers in these fixtures – Steven Gerrard joined Mark Warburton, Pedro Caixinha and Graeme Murty on that list.

4 – Queen of the South climbed to third in the Ladbrokes Championship after thumping Ayr United 5-0 at Palmerston. Stephen Dobbie scored four of his side’s goals and could even afford to see a first-half penalty saved by Ayr keeper Ross Doohan. The 35-year-old striker has taken his tally for the season to an incredible 18 goals from 10 matches and is already two-thirds of the way to matching his entire total for last season. It will come as little surprise that the last player to score four goals in a game for the Doonhamers was Dobbie himself, in a 7-1 win over Clyde in his first spell at the club in April 2009.

27 – Raith Rovers defeated Forfar Athletic 4-0 at Stark’s Park to move level on points with Arbroath at the top of Ladbrokes League 1. Rovers are unbeaten in 27 league matches in Kirkcaldy, with their last defeat coming against Morton back in February 2017. Rovers are now just two matches short of equalling their club record unbeaten home league record of 29 matches, which was first set from 1907-1910 then equalled from 1992-1993. Saturday’s four-goal success was their biggest league win at home in over six years, since Morton were vanquished 5-0 in March 2012.

5 – Berwick Rangers moved away from the foot of the Ladbrokes League 2 table thanks to an exciting 5-3 victory over Albion Rovers at The Reigart Stadium. Robbie Horn’s side trailed 1-0 and 3-2 but fought back to earn their second victory of the season. It was the first time in almost seven years that Berwick had scored five times away from home – that was also a 5-3 victory, against Montrose back in November 2011.