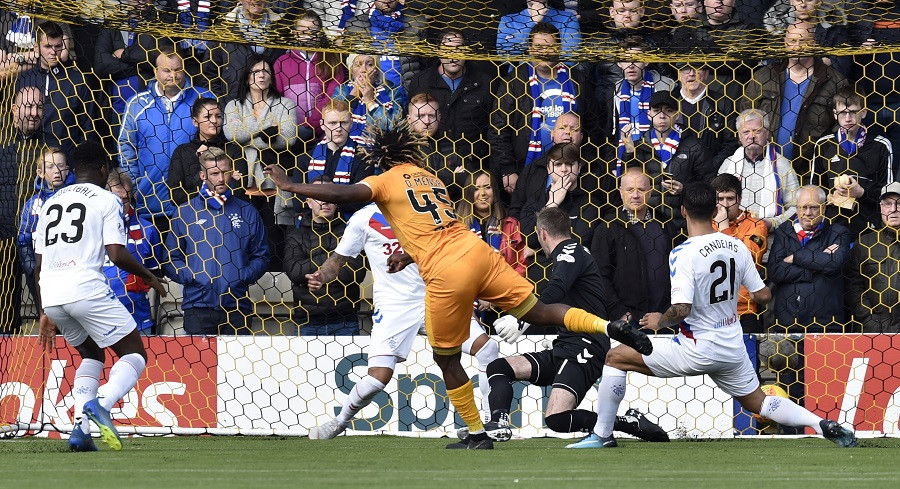 Resident statto @splstats looks at some of the key numbers from the weekend.

1 – Livingston are third in the Ladbrokes Premiership table thanks to a 1-0 victory over Rangers at the Tony Macaroni Arena. The Lions are unbeaten in six Premiership matches since their opening-day defeat at Celtic Park, which is their best undefeated run in the top flight since August-October 2001. That was Livi’s first campaign in the top flight and they went on to finish third. Liam Kelly and his defence have conceded just one goal in those six matches. Gary Holt has picked up four wins and a draw in his first five matches at the club, equalling the best start by a Livi manager – the only other boss to make such a good start was Jim Leishman in the club’s first five matches in August 1995.

13 – Heart of Midlothian defeated St Johnstone 2-1 at Tynecastle to remain five points clear of Hibernian at the top of the Ladbrokes Premiership. Craig Levein’s side are the only club in the SPFL who remain unbeaten in all competitions this season – they have picked up 11 wins and two draws in their 13 matches. This represents the Jam Tarts’ longest unbeaten start to a season since 1959/60, when they went an amazing 24 matches without defeat. Hearts fans will need little reminding that 1959/60 was also the last time their club were champions of Scotland.

5 – Ross County thumped Dundee United 5-1 at Tannadice to keep up the pressure on Ayr United at the top of the Ladbrokes Championship. Billy Mckay was the hero for the Staggies – the Northern Irishman notched his first hat-trick in almost six years to put his former club to the sword. Mckay now has three career hat-tricks – his first also came at Tannadice, for Inverness Caledonian Thistle in a 4-4 draw in December 2012, while his second came when ICT beat Motherwell 4-3 in May 2013. Saturday’s win was Ross County’s biggest ever victory at Tannadice. It was the first time they have scored five goals in an away league game since a 5-3 victory over Queen of the South on the final day of their 2011/12 Division 1 title winning season.

5 – John McGlynn’s second spell in charge of Raith Rovers got off to the best possible start with a 5-1 thrashing of Dumbarton at the C&G Systems Stadium. Rovers remain unbeaten in eight Ladbrokes League 1 matches this season - if you include the end of last season (discounting the play-offs) that run extends to 15 league matches without defeat. Saturday’s victory equalled Rovers’ biggest ever away win over the Sons – the last time they managed a four-goal winning margin in Dumbarton was a 4-0 Scottish Cup victory at Boghead in March 1957.

1 – Albion Rovers finally picked up their first win of the season, beating Stirling Albion 3-0 at the Reigart Stadium to move to within a point of Cowdenbeath at the foot of Ladbrokes League 2. It was a rare success for Rovers in this fixture – they had previously picked up just one win in their last 14 matches against the Binos. John Brogan’s side had kicked off the season with 11 consecutive defeats but last week’s 1-1 draw at Cowdenbeath followed by Saturday’s win suggests things may be starting to look a little more rosy.