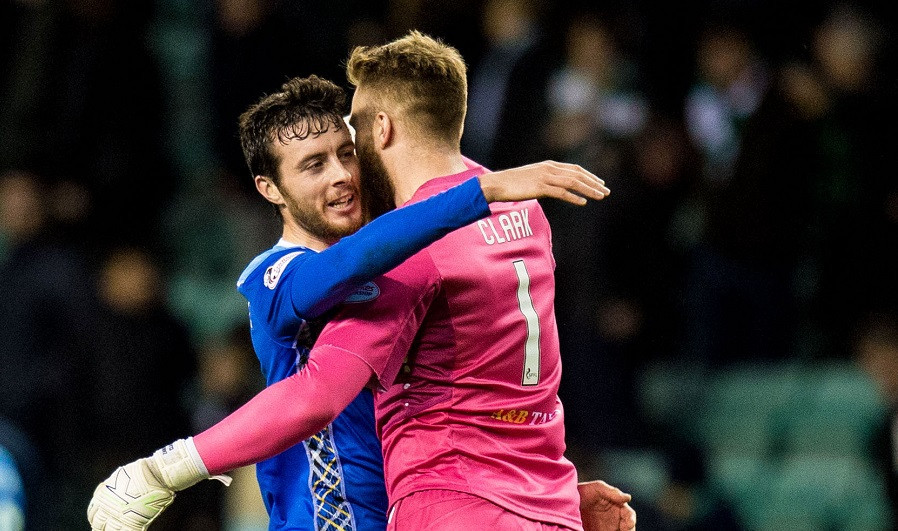 Resident statto @splstats looks at some of the numbers behind the weekend games in the SPFL...

4 – St Johnstone moved up to fifth place in the Ladbrokes Premiership thanks to a 1-0 win over Hibernian at Easter Road. Tommy Wright’s side have recorded four consecutive victories for the first time since April-May 2016 and find themselves just six points behind leaders Heart of Midlothian. Prior to this run of games, Saints had lost four in a row, conceding 14 goals in the process, but they have turned their defensive woes around to chalk up four straight clean sheets. It had been over seven years since they last achieved four straight shut-outs – that came from May-July 2011 when Derek McInnes was still in charge. Saints have never kept five consecutive clean sheets in the top flight so Zander Clark and his defence will have the opportunity to set a new record when they play Hamilton Accies at McDiarmid Park on Saturday.

5 – Celtic thumped leaders Heart of Midlothian 5-0 at Celtic Park to move to within a point of their opponents at the top of the Ladbrokes Premiership. Brendan Rodgers’ side have scored 20 goals in their last four Premiership fixtures, having previously only netted seven times in their first seven games. The Hoops have recorded back-to-back 5-0 victories in the Premiership – it is the first time in over a decade they have scored five times in consecutive league games. That was in August-September 2007, when Gordon Strachan’s side actually scored five in three straight league games – a 5-0 home win over Hearts, a 5-1 win over St Mirren in Paisley and a 5-0 home victory over Inverness.

5 – Greenock Morton moved into fourth place in the Ladbrokes Championship after thrashing Partick Thistle 5-1 at Cappielow. After an indifferent start to his career in Greenock, manager Jonatan Johansson has now picked up three wins out of four to take his side into the play-off places. The Ton had lost their last four matches against Thistle, starting with the de facto SFL Division 1 title decider in April 2013. Saturday was the first time in over five years that Morton had scored five goals in a home league match – the last occasion was in April 2013 when they defeated Airdrieonians 5-2, helped by a Peter MacDonald hat-trick.

31 – Raith Rovers defeated Brechin City 2-1 at Stark’s Park to remain seven points behind Arbroath in the race for the Ladbrokes League 1 title. Rovers extended their unbeaten home league record to 31 matches, a run which has spanned 21 months and three different managers. Their last defeat was a 1-0 loss to Morton in Gary Locke’s final game in charge - since then John Hughes, Barry Smith and John McGlynn have all avoided league defeat in Kirkcaldy. Kevin Nisbet netted a double in Saturday’s match to make him the outright top league goalscorer across all four divisions – the 21-year-old has 15 goals in 12 league matches this season.

1 – Peterhead moved to the top of the Ladbrokes League 2 table after beating Albion Rovers 2-1 at Balmoor. The Blue Toon have recorded seven consecutive victories in all competitions, including six in a row in the league. Including the final fixtures of last season, Jim McInally’s side have won 15 of their last 17 league matches. Peterhead have 28 points from their opening 11 fixtures, which is their best start since their SFL Division 3 title-winning 2004/05 campaign, when they had 31 points at the same stage.