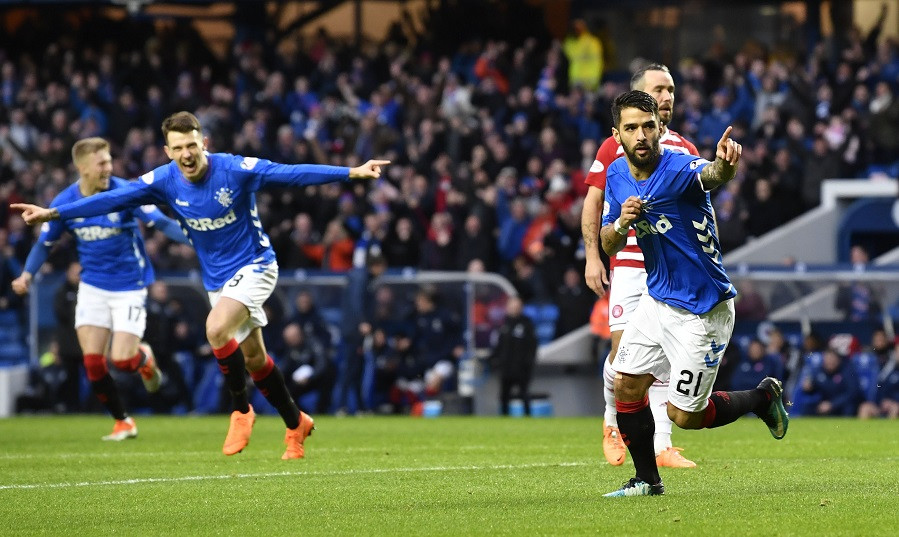 1 – Rangers are top of the Ladbrokes Premiership table after defeating Hamilton Academical 1-0 at Ibrox on Sunday. Steven Gerrard’s side are ahead of second-placed Kilmarnock on goal difference and a point clear of Celtic. The Gers continued their impressive home defensive record – in 17 matches at Ibrox in all competitions they have conceded just eight goals. No opposing team has managed to score more than once at Ibrox and Sunday’s shut-out was their ninth home clean sheet of the season.

5 – Livingston thumped Heart of Midlothian 5-0 at the Tony Macaroni Arena on Friday night to climb to sixth spot in the Ladbrokes Premiership. The match was level at 0-0 until the 72nd minute but the Lions rattled in five goals in the space of 14 minutes through Craig Halkett, Dolly Menga, Ryan Hardie (2) and Shaun Byrne. It was Livi’s biggest ever top-flight victory and Gary Holt’s side have the best home record in the Premiership, having picked up 23 points from their 10 home fixtures.

28 – Ayr United remain a point clear at the top of the Ladbrokes Championship after drawing 3-3 with second-placed Ross County at Somerset Park. Lawrence Shankland continued his incredible goalscoring form, netting a double to take his tally to 28 goals from 24 matches this season. Shankland has scored an astonishing 18 goals in 16 appearances in the Ladbrokes Championship this season, making him the joint-top scorer in the SPFL alongside Raith Rovers’ Kevin Nisbet. The Honest Men remain unbeaten at home in all competitions – they have picked up seven wins and three draws in 10 matches at Somerset Park.

8 – Arbroath continued their unbeaten start to the Ladbrokes League 1 season with a 1-0 victory over Airdrieonians at the Penny Cars Stadium. Dick Campbell’s side are the only undefeated side in the SPFL and sit 13 points clear of Raith Rovers at the summit. Saturday’s success was their eighth consecutive league victory, which is their best run since October-December 1981. The Red Lichties face closest challengers Raith Rovers at Gayfield on Saturday - if they win they will equal their club record of nine straight league wins.

3 – Edinburgh City defeated Elgin City 4-1 at Ainslie Park to move five points clear at the top of the Ladbrokes League 2 table. Blair Henderson was once more the key man for the Citizens, scoring a hat-trick to take his tally for 2018/19 to 24 goals. The striker also scored 12 times for Annan Athletic in the second half of 2018 and therefore has managed an hugely impressive 36 goals in this calendar year, including three hat-tricks.