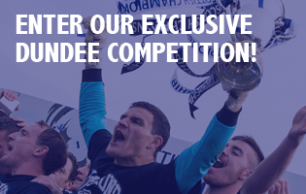 Your chance to present the Championship flag to Dundee!

Win the chance to present the SPFL Championship winners flag to Dundee on Thursday!

DUNDEE will kick off the new SPFL Premiership season against Kilmarnock this Saturday, unfurling the 2013/14 SPFL Championship winners flag before the game – and we are giving one young fan a chance to present the flag to the club, on Thursday, in the run-up to the opener in our exclusive competition.

The SPFL, believed to be the only league body in the world which presents flags to league winners, will visit Dens Park this Thursday to deliver the memento of Dundee’s Championship triumph last season.

One lucky Dundee fan (aged under-16) will be invited to attend the flag handover at lunchtime this Thursday August 7, with club manager Paul Hartley on hand to receive it, pose for photos and chat about the upcoming campaign.

The winner will also receive a pair of tickets to the opening game of the season.

All you have to do to enter is post your name (if under-16) or the name of your nominated under-16 in the comments section below the following post on the SPFL Facebook page, and tell us in no more than 25 words why you or they deserve to hand over the flag.

Entrants must be available on Thursday, August 7 and be able to arrange their own transport to the ground. As the competition is for under-16s, the winner should be accompanied by an adult.

Competition closes at 5pm this Wednesday. The winner will be selected at random and contacted by the SPFL.