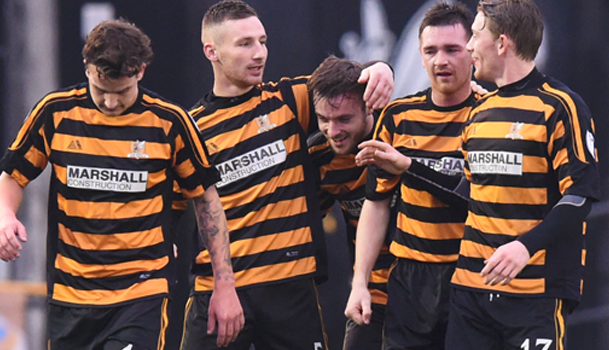 Alloa entertain Rangers this evening in the semi-final of the Petrofac Training Cup, with the Indodrill Stadium side looking to reach the final for the third time since 199 - when they won it that year under the guidance of their Duffle coat-wearing manager Terry Christie.

Here are 10 things you may not know about the Wasps:

1 Alloa were formed in 1878 and were originally known as Clackmannan County. That moniker lasted for one season and they then became the Alloa Association Football Club before they became Alloa Athletic in 1883.

2 In their first ever season of league football back in 1921-22 Alloa won the Second Division title. It was a bit of a romp as they finished 13 points ahead of Cowdenbeath with a record of played 38, won 26, drew 8, lost 4, goals for 81 and goals against 32.

3 The record attendance at the Indodrill Stadium (Recreation Park) is listed as 13,000 for a Scottish Cup replay against Dunfermline in February 1939.

4 Jock Hepburn remains Alloa's most-capped player, with the one cap he received for Scotland against Wales in 1891.

5 Archie McPherson was the manager of Alloa for 10 years from 1959. No, not that one, but a former defender who played at Rangers, Liverpool, Sheffield United and Falkirk and who went by the nickname 'Curly'.

6 John 'The Ghost' White started his senior career at Alloa before moving to Falkirk and Tottenham Hotspur. It was the White Hart Lane fans that came up with the nickname due to the way White popped up in the box unexpectedly to score.

7 Alloa won the Challenge Cup in 1999 in a game where Paul Sheerin of opposing side Inverness Caledonian Thistle scored a hat-trick. The game ended 4-4 with Sheerin, who had netted twice from the spot during the 120 minutes of action, missing in the shoot-out. Alloa goalkeeper Mark Cairns saved and scored in the shoot-out.

8 Alloa made the final again in 2001 however they lost 2-1 to Airdrie. Former St Johnstone, Burnley, Bolton Wanderers and Wigan manager Owen Coyle and current Ayr United manager Mark Roberts scored for the Diamonds with one-time Livingston manager Gareth Evans netting for the Wasps.

9 Alloa have kept a core of the players that started life with former manager Paul Hartley in the summer of 2011 in the Third Division. Ben Gordon, Mark Docherty, Michael Doyle, Graeme Holmes, Ryan McCord and Kevin Cawley are all still at the club from Hartley's first game in charge against Peterhead. A seventh player, Scott Bain, played for Hartley's Dundee in their Scottish Cup win over Aberdeen at the weekend.

10 Alloa are known as the Wasps due to the yellow and black colours that they first wore over 100 years ago. A new club badge was launched in 2010 with a modern-looking comical insect.