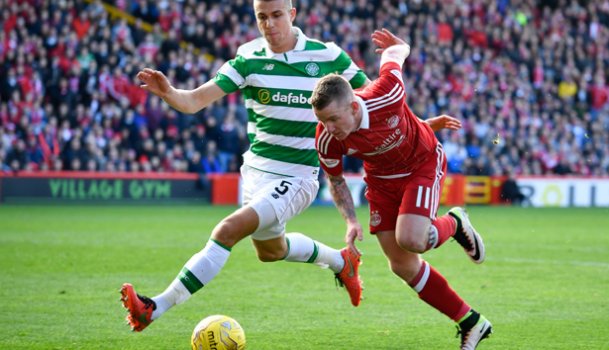 Craig Fowler of the Terrace Scottish Football Podcast identifies the potential match winners for Aberdeen and Celtic ahead of Sunday&rsquo;s Betfred Cup Final.

Craig Fowler of the Terrace Scottish Football Podcast identifies the potential match winners for Aberdeen and Celtic ahead of Sunday’s Betfred Cup Final.

Stuart Armstrong (Celtic)
Celtic will look to completely dominate the midfield battle and while we know what to expect from Scott Brown, it'll be interesting to see if his midfield partner can keep up his recent form on such a grand stage. If he does, then Aberdeen are in for a long afternoon. Armstrong looks so suited to playing the No.8 in Celtic's system, where he can use his determination and athleticism to break up opposing attacks, before striding forward with the ball.

Moussa Dembele (Celtic)
A winner against Astana, a hat-trick against Rangers, two goals against Manchester City, a goal in Gladbach and a winner in the Betfred Cup semi-final; it's fair to say Dembele likes playing in the big games.The responsibility will weigh even greater on his shoulders this weekend with Celtic missing potent attacking threat in full-back Kieran Tierney and, potentially, Scott Sinclair. However, as he's shown thus far, the 20-year-old is capable of handling such pressure.

Jonny Hayes (Aberdeen)
The Dons winger loves scoring a howitzer against the champions and there would be no better time to repeat the trick than Sunday. Aside from his shooting ability, Hayes' all-round game will be so important to Aberdeen's chances. If he can successfully impose himself on the game, then his direct running style will unsettle Celtic's defenders. If he can dribble around his adversaries on a few occasions, then space will open up not only for himself, but the rest of Aberdeen's attack as well. Furthermore, his tenaciousness off the ball will be a big help to Aberdeen's attempts to stop Celtic playing.

Joe Lewis (Aberdeen)
Craig Gordon is looked upon as the best goalkeeper in the SPFL. The only player you could really argue otherwise is Aberdeen's summer signing. Not only has he not put a foot (or a glove) wrong since arriving at Pittodrie in the summer, he's also shown a penchant for making some incredible stops. He could prove a point this weekend that he is indeed superior to his opponent, if he can repel Celtic attacks in the same manner as he did in the last meeting between the two, but go one further and help his side secure victory.

James Maddison (Aberdeen)
There's a big debate as to whether the young midfielder will start the game. Derek McInnes decided to leave him on the bench from the start of both of Aberdeen's home games against the Old Firm this season, so history would suggest Maddison will have to be patient. Regardless, his set-piece ability, allied with his technique and creativity on the ball, make him a threat wherever he plays. Aberdeen may need something conjured out of nothing if they're going to win this final. Maddison may be the magician they're looking for.

Patrick Roberts (Celtic)
Similar to Maddison, fans are unsure whether the on-loan Manchester City player will start the game. He's not had much of a look-in this season and even though Scott Sinclair is out injured, there's no certainty he'll get the nod ahead of James Forrest and Callum McGregor. If he does play, expect him to try and impose himself at the heart of the action. With the possibility of Sinclair missing out, this is his chance to establish himself in the team and a starring role in a cup final would go a long way to doing just that.