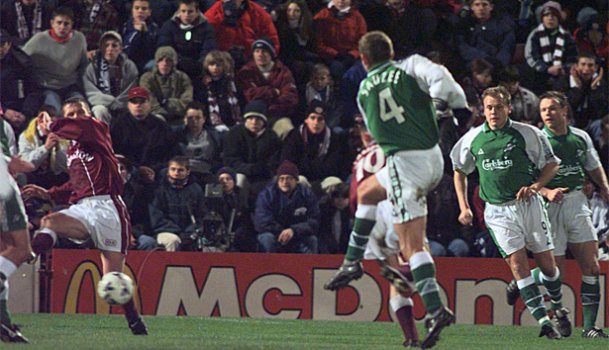 In this week&rsquo;s Magic Number article, we take a look at some top&nbsp;defenders who&nbsp;have worn the Number 4 jersey in Scottish football.&nbsp;

In this week’s Magic Number article, we take a look at some top defenders who have worn the No 4 jersey in Scottish football.

Russell Anderson – Aberdeen
With over 400 appearances for Aberdeen, Russell Anderson rightly lays claim to ‘legend’ status at Pittodrie. Add to that the fact he lifted silverware as club captain in their 2014 League Cup triumph, and you can see why the big centre-half will always be held in the very highest of regard in the Granite City. Making his debut in 1996, he would play a total of 328 games in his first spell before heading for the shiny lights of the English Premier League. Unfortunately for Anderson, his time in England would be hampered by injury and led to stop-start spells with Sunderland, Plymouth Argyle and Derby County. In 2012, he re-signed for Aberdeen and went on to make a further 85 appearances for the club he holds closest to his heart. Anderson retired in May 2015, and now holds a business development role at Pittodrie. On top of his large appearance tally at Aberdeen, Anderson also earned 11 caps for Scotland and was part of the 2006 team that won the Kirin Cup.

Steven Pressley – Heart of Midlothian
When ‘Elvis’ signed from Dundee United in July 1998, not many expected the then right-back to become a commanding centre-half and cup-winning skipper. But that’s exactly what Steven Pressley did during an eight-year spell at the Gorgie outfit. He was first made captain by Hearts’ current Director of Football Craig Levein in 2001 following his shift from full-back to centre-half and a number of influential displays. He would go on to hold on to the armband for a further five years, making him the second-longest serving captain in Hearts’ history. During his spell as leader, Hearts gained three third-place finishes, a second-place finish and a famous Scottish Cup win. The passionate defender scored the first penalty in the decisive shoot-out against Gretna, following a 1-1 scoreline after extra-time. After Hearts, Pressley went on to play for Celtic, Randers (Denmark) and Falkirk before beginning his career in management.

Franck Sauzée – Hibernian
You needn’t look any further than Franck Sauzée’s nickname at Easter Road to realise the size of the impact he had at the Edinburgh club. ‘Le God’. The classy Frenchman is widely regarded as one of the best to grace the green & white in the modern era, even though Leith was to be the 39-time capped defender’s last destination in professional football. With a CV that boasted Ligue 1 giants Marseille and Monaco, Sauzée was a marquee signing upon his arrival in 1999 and went on to win the hearts of Hibees over a three-year spell as their captain. A 20-yard strike against Edinburgh rivals Hearts at Tynecastle in a match billed as the ‘Millennium Derby’ endeared him completely to the Hibs faithful, and was one of 13 goals he managed at the club in the space of 77 appearances. Following a brief spell as manager at Easter Road, Sauzée made his way back to his native France and now works as a football pundit for various French TV stations.

Lorenzo Amoruso – Rangers
With nine domestic trophies in six years as a Rangers player, Lorenzo Amoruso undoubtedly enjoyed the best spell of his career at Ibrox. Signing from Fiorentina in 1997, the big Italian defender quickly set about making a name for himself at the Gers and won his first silverware with the club in 1999 – a year that saw Rangers win the domestic treble. They would go on to retain the SPL title the year after, and in 2001/02 Amoruso won the SPFA Player of the Year award for his role in helping the club win the Scottish Cup and League Cup. The following season, Rangers repeated the feat they achieved in 1999, winning the domestic treble for the second time during Amoruso’s tenure at the centre of defence. That season was to prove Amoruso’s swansong in blue & white as he signed for Blackburn Rovers in July 2003. The Lancashire outfit were to be his last club in professional football and he retired in the summer of 2006.