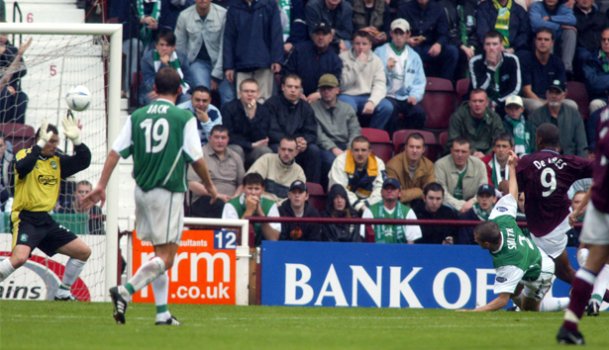 We take a look at one of the most popular numbers in football, and pay close attention to some players who have made an impact in Scotland whilst wearing the coveted No.9

We look at one of the most popular numbers in world football, and pay close attention to some players who have made an impact in Scotland while wearing the coveted No 9.

Michael Higdon – Motherwell
The big Scouser made a huge impact during his time with Motherwell, gathering a Player of the Year award and Premiership Golden Boot accolade in 2012/13. He scored at will for a menacing Well attack, and not many goals could compete with his 30-yard belter at Tannadice. He had been in Scotland for four years before joining the Fir Park club, enjoying spells with Falkirk and St Mirren. After leaving Motherwell in 2013, he played in Holland with NEC Nijmegen before returning to England and playing with Sheffield United, Oldham Athletic and Tranmere Rovers.

Juan Sara – Dundee
You know you’re a club cult hero when you have a derby named after you! The Juan-two-three Derby will forever stick in the mind of Dundee fans as their Argentine striker Juan Sara scored a hat-trick and put Dundee United to the sword in emphatic fashion in 2000. The three years spent with The Dee would be the finest in his career, scoring 28 goals in 88 appearances. After he left in 2003 Sara spent time in Italy, Ireland, Liechtenstein, Argentina for a host of different clubs but was never able to re-find the form that made him a fans’ favourite at Dens Park.

Mixu Paatelainen – Hibernian
The big Finn is a household name in Scottish football after spending a number of years in his playing and management career in the country. Mixu Paatelainen had already starred for both Dundee United and Aberdeen before putting pen to paper at Easter Road, but it was in Leith that he made himself a hero. In one of Hibernian’s greatest ever results against rivals Hearts, Mixu scored a hat-trick. Hibs would win the game 6-2, as emphatic a victory over the Jambos as they’d enjoyed in 30 years. Paatelainen would later manage the Edinburgh team from 2008 to 2009, before joining Kilmarnock as gaffer. Since then he’s been in charge of the Finland national side and Dundee United.

Mark de Vries – Heart of Midlothian
“Dreamland for the Dutchman!”, shouted the commentator as Mark de Vries stroked home his second of four goals on his home debut for Hearts. What made this all the more incredible is that the debut was against Hibernian, in a game that the Jambos would dominate 5-1. De Vries would go on to become a consistent goalscorer in Gorgie, scoring important goals in both domestic and European competitions. As well as his quadruple against Hibernian, de Vries is very fondly remembered for hitting the winning goal in a UEFA Cup tie away to Bordeaux in 2003. After his time at Hearts, he went on to play for Leicester City, Heerenveen, Dundee United and SC Cambuur.