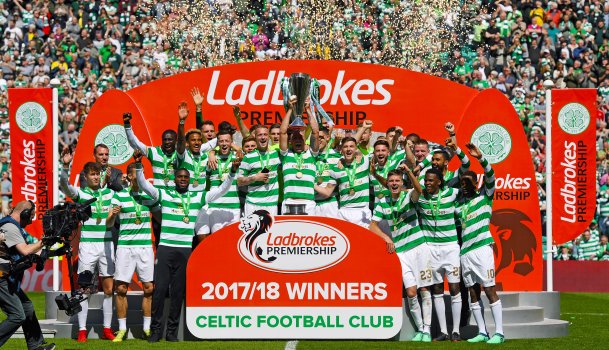 Premiership Team of the Season

GK - Jon McLaughlin (Hearts)
From having trouble finding a club at the start to finishing the season as a member of the Scotland squad, it's been quite the rise for the Edinburgh-born shot-stopper. He made very few mistakes, pulled off a number of impressive saves and earned a club clean-sheet record.

RB - James Tavernier (Rangers)
The full-back improved at both ends of the field this campaign, even if ultimately it was the same result for the Ibrox club as they finished third. Tavernier tallied a combined 14 goals and assists and became a much better back-post defender.

DC - Christophe Berra (Hearts)
It looked like quite the coup when Hearts managed to lure their former captain back to the club and so it proved. The Scottish international was a colossus at the back, leading the league in aerial duels won for players at his position.

DC - Scott McKenna (Aberdeen)
The rise and rise of Scott McKenna has been quite something. He started the season as the fourth, arguably fifth, choice centre-back but ended up being Aberdeen's best player over the piece. He was even awarded the man of the match award after his second of two appearances for Scotland.

LB - Kieran Tierney (Celtic)
The Celtic left-back didn't quite match the heights of last season but it was still another strong campaign from the Young Player of the Year winner, an award he snared for the third season in succession.

RM - James Forrest (Celtic)
Forrest put any talk of lacking a final ball to rest once and for all with an incredible return of 17 goals in all competitions. Celtic signed both Jonny Hayes and Patrick Roberts last summer, two players who could play in his position, and yet it was the Scottish international who shone.

CM - John McGinn (Hibernian)
The all-action midfielder proved his excellent play of the previous two seasons wasn't just the result of playing against weaker opposition in the Championship as he made top-flight players look similarly foolish time and again. Capable of making a difference at both ends of the field, he led the league in passes to the final third with a whopping 436.

CM - Dylan McGeouch (Hibernian)
While McGinn brought the drive, McGeouch had the composure. His ability to play Hibs out of trouble and keep opponents on the back foot by constantly recycling possession was a major reason for the Easter Road club finishing in fourth place.

CM - Scott Brown (Celtic)
This season's star man. The Parkhead captain found a level of consistency this season that even his biggest fans wouldn't have thought possible. He both dictated games and stopped opposing sides in their tracks, and Celtic were clearly weaker when he wasn't there.

FC - Jordan Jones (Kilmarnock)
Undeniably one of the most exciting players to watch in the league, the winger loves nothing more than to take on an opponent. Even in the first half of the campaign, where Kilmarnock were more relegation battlers than top-six hopefuls, he still managed to shine.

FC - Kris Boyd (Kilmarnock)
The top goalscorer in the Ladbrokes Premiership. The turnaround in Boyd's form this season was so impressive that even the player himself was taken by surprise. Not only did he contribute through his 18 league goals, he proved that at age 34 he could still be the focal point of an attack.