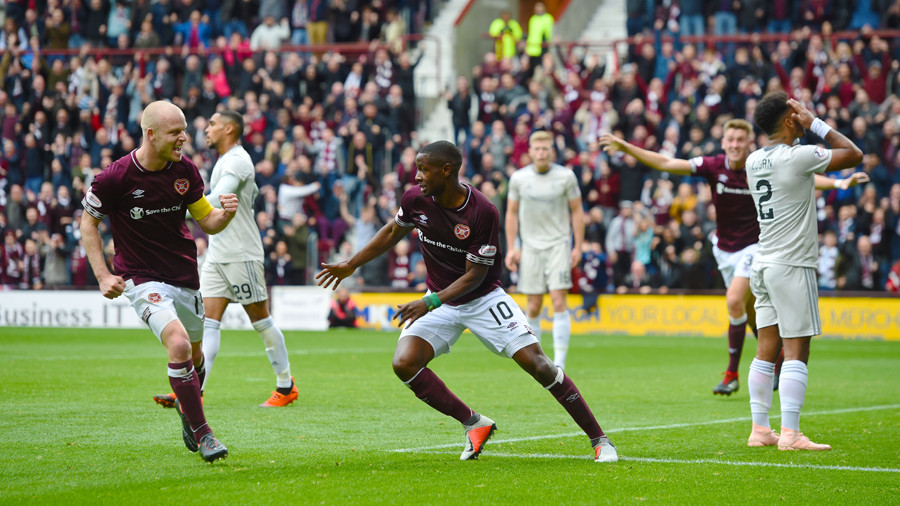 Round-up of today's games in the SPFL

Heart of Midlothian are three points clear at the top of the Ladbrokes Premiership after beating Aberdeen 2-1 at Tynecastle. Arnaud Djoum and Steven Naismith (penalty) scored for Craig Levein's side before Gary Mackay-Steven pulled one back from the spot.

Celtic are up to second thanks to a 4-2 victory over Hibernian at Parkhead, helped by a double from Odsonne Edouard. Livingston continued their outstanding run by thumping Dundee 4-0 at the Tony Macaroni Arena, Kilmarnock came from behind to beat St Mirren 2-1 in Paisley and St Johnstone beat Motherwell 1-0 at Fir Park.

Ross County replaced Ayr United at the top of the Ladbrokes Championship with a 2-1 win in Dingwall thanks to goals from Billy Mckay and Josh Mullin. Inverness CT remain unbeaten after a 1-1 draw with Dundee United at Tannadice while Queen of the South beat Dunfermline Athletic 1-0 at East End Park. Morton defeated Falkirk 1-0 at Cappielow and Alloa Athletic earned their first win of the season, beating Partick Thistle 1-0 at the Indodrill Stadium.

Arbroath stay four points clear in Ladbrokes League 1 after coming from behind to beat Dumbarton 3-1 at Gayfield. Second-placed Raith Rovers beat Stranraer 2-1 at Stark's Park and East Fife won again, seeing off Brechin City 3-1 at Bayview. Airdrieonians were 3-0 winners away to Montrose and Forfar Athletic beat Stenhousemuir 2-1 at Ochilview.