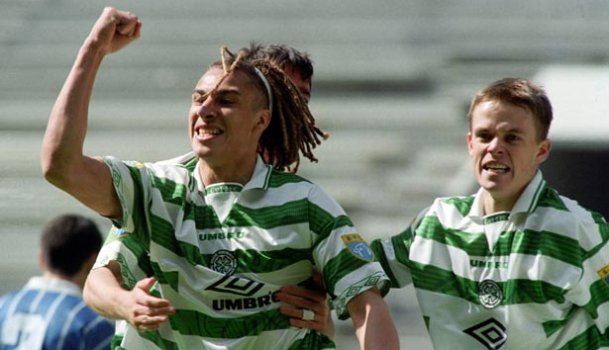 Neil Sargent looks back at the kit worn by Celtic in their famous 1997/98 title winning season - the year they prevented Rangers from winning 10-in-a-row.

Season 1997-98 produced one of the most gripping title races Scottish football has ever seen.

Rangers, Hearts and Celtic battled for the trophy over the course of an exhilarating campaign which saw the lead at the top change hands on what seemed like a weekly basis. With the small matter of Rangers’ pursuit of a record breaking 10-in-a-row thrown into the mix, it made it one of the most memorable seasons in the history of our game.

Of all the kits in Scottish football, Celtic’s is arguably the most consistent and the most recognisable. The green and white hoops have remained practically unchanged since they replaced vertical stripes in 1903, with only slight tinkering to the size of the hoops and the shade of the green.

Even the kit manufacturer had never changed. Umbro had made every Celtic kit since brands were first introduced to the club’s jerseys in 1976. The 1997 kit wasn’t just made by Umbro either, it was also sponsored by them. The only real change to the strip came with the positioning of the badge in the centre of the top – the first time it had been there since 1979.

Wim Jansen was appointed manager in the close season and tasked with halting Rangers’ bid for ten titles in a row.

Nobody could have predicted the success the season would ultimately bring, however, after a poor start saw Jansen’s men lose their opening two league matches and slip to the bottom of the table. Henrik Larsson made his Celtic debut on the opening day away to Hibernian, replacing Andreas Thom after 59 minutes, but the match ended in disappointment as Chic Charnley’s 79th minute winner gave the hosts a 2-1 win. The following week, David Bingham and Hamish French scored as Dunfermline won 2-1 at Celtic Park.

From there, though, they went on an eight-match winning run which took them from the bottom of the table to the top, ahead of Hearts in second and Rangers in third. Their run was ended by a 1-0 defeat at Ibrox in November, then just two weeks later Alan Stubbs’ injury-time header earned a crucial 1-1 draw for Jansen’s men when a second derby defeat in as many weeks looked imminent.

The surprise package of the season, however, was Hearts. On 13th December Jim Jefferies’ high flyers travelled to Celtic Park top of the table, leading the Hoops by five points and knowing that a win would put them eight points clear. On the day though, a Craig Burley goal ten minutes from time was enough to give Celtic a crucial win and move them to within touching distance of the summit again.

The lead at the top ebbed and flowed for the next month, but by January 2nd Rangers visited Celtic Park with a four point lead over their rivals, aiming for a win that would surely set them on their way to another title. However, a fired-up Celtic were not about to let that happen on their own patch and goals from Burley and Paul Lambert gave them a memorable 2-0 win.

That inspired an unbeaten run that would ultimately give Celtic the title. They didn’t lose again for 11 matches and headed into the final derby of the season with a three-point advantage over their rivals. But in another twist to the tale, Jonas Thern and Jorg Albertz scored in a 2-0 win for Rangers that not only cancelled out Celtic’s points advantage but put Walter Smith’s men back on top of the table on goal difference.

The race was going down to the wire, but it was Celtic’s rivals who began to falter. Following their derby win, Rangers lost two of their next three games - a 1-0 defeat to Aberdeen at Pittodrie and a 1-0 home defeat by Kilmarnock. Hearts, on the other hand, hit a five-match winless run in April that ended their charge.

That left the way clear for Celtic to make their move. They hammered Motherwell 4-1, but consecutive draws with Hibernian and Dunfermline left nerves jangling and meant that the title race would go down to the final day, and a decider against St Johnstone at Celtic Park. They held a two point lead, but with a goal-difference advantage of just one goal they needed to win to be sure of their first championship for ten years.

In front of a manic Celtic Park crowd, Larsson scored after only 3 minutes to settle the nerves and when Harald Brattbakk doubled the lead with 18 minutes to go the title was secure.

The celebrations that followed will go down in Celtic history, as Tom Boyd lifted a trophy that signalled the club’s long awaited return to the top of the Scottish game.