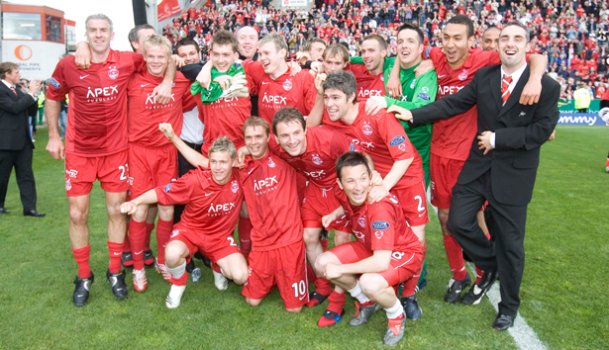 Neil Sargent looks back at the 2006/07 Aberdeen team that Jimmy Calderwood led to a third-place place finish and European football.

Season 2006-07 started in unconvincing fashion for Aberdeen and threatened to be a disappointment but by the end of the campaign the Dons were celebrating a third-place finish and a return to European football.

It was a remarkable turnaround masterminded by enigmatic manager Jimmy Calderwood.

Calderwood had been in charge at Pittodrie since 2004 and had guided them to finishes of fourth and sixth in his first two years at the helm. Expectations were high going into the new season, buoyed by a productive pre-season tour in South Africa that saw the Reds win three of their four fixtures on the road.

The Dons’ strip for the campaign was manufactured by Nike for the third successive season. Nike’s Aberdeen kits were characterised by being simple and traditional, and this one was no different. The plain red top, shorts and socks were adorned with only the most subtle of white trim, harking back to the style of the 1960s and early ‘70s. The kit was sponsored by local firm Apex Tubulars, who had a number of interests in the city’s oil and gas sector.

For only the second season, Aberdeen included two stars above their club badge, representing their two European trophy wins. The stars are now a regular feature on Dons kits but it didn’t start until 2005 and so was still a rather novel concept at the time.

The league campaign started in solid, if unspectacular, fashion, with three draws and a win from their opening four games. However, a penalty shoot-out defeat at home to Third Division Queen’s Park in the League Cup saw critics round on the team, and four defeats in their next six games left some fans unconvinced as to what the season ahead might hold.

From October, though, Calderwood’s men embarked on a brilliant run, winning six of their next eight games including a crucial 1-0 win over European hopefuls Hearts at Tynecastle.

As the New Year came and went, Aberdeen’s fine form continued, but Hearts, now managed by Anatoly Korobochka, remained tight on their tails until just three games remained that would settle the season.

Aberdeen sat in third place, four points clear of the Jambos in the chase for the one and only UEFA Cup spot. Crucially though, the Dons’ last three fixtures were away to Hearts and Celtic, before finishing with a home match against Rangers. The scene was set for an epic conclusion.

On 6th May Aberdeen visited Tynecastle in a vital showdown. Andrius Velicka fired Hearts into an early lead and it looked like being enough as the clock ticked towards the 90, but with just seconds to spare Barry Nicholson slid in at the back post to prod a Craig Brewster cross over the line and secure a crucial point in front of a delirious travelling support.

One week later they lost 2-1 at Celtic Park while Hearts beat Hibernian 2-1 at Tynecastle, meaning the Dons’ advantage was reduced to just one point going into the last round of matches. They would face Rangers at Pittodrie while Hearts visited fifth-place Kilmarnock.

In one of the most memorable Pittodrie matches for years, Scott Severin and Steve Lovell scored inside 32 minutes to give the Dons a 2-0 win and confirm their place in the UEFA Cup the following season.

After a disappointing start to the campaign, Calderwood’s side had redeemed themselves and written their names into the club’s history books.