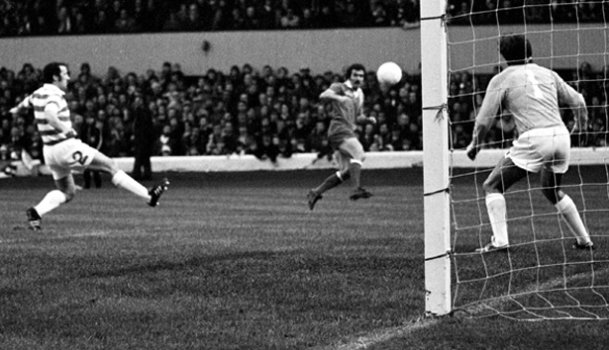 As Aberdeen prepare to take on Celtic at Hampden Park in the 2016/17 Betfred Cup final, they can take heart from some famous triumphs by Dons teams from the past.

This is the story of the 1976/77 League Cup final and the kits that both teams wore when a spirited Aberdeen team upset the odds to take the trophy back to Pittodrie.

Celtic had spent the previous decade sweeping all before them in Scottish football. Between 1965 and 1974 they won nine league title in a row under Jock Stein, and by 1976 they had won the Scottish Cup in four of the previous five seasons. Even more amazingly, the League Cup final against Aberdeen would be their 13th consecutive League Cup final appearance, of which they had won six and lost six.

The Celtic squad featured some of the greatest players in the club’s history, including Danny McGrain, Kenny Dalglish, Tommy Burns and Bobby Lennox, who was the sole surviving Lisbon Lion in the team who had lifted the European Cup in 1967. If that wasn’t daunting enough for the Dons, Celtic went into the match top of the league once again and clear favourites with the bookies.

Aberdeen, on the other hand, hadn’t featured in a League Cup final since winning the competition against St Mirren in 1955/56. Their last trophy success of any description had come in the Scottish Cup final six years before.

However, the Dons could take hope from some recent finals which had seen Celtic lose to teams who they were expected to beat. In 1971/72 they were thrashed 4-1 by Partick Thistle, and then lost the next two finals to Hibernian and Dundee. After winning the trophy in 1974/75, they again lost at Hampden the following year, this time to Rangers.

The Dons were managed by Ally MacLeod who had joined in 1975 after a successful spell at Ayr United. Amongst the biggest names in their squad were Willie Miller, Joe Harper and Drew Jarvie.

Aberdeen’s kit for the 1976/77 season was their first deviation from a plain red top since they had adopted the colour in 1939. The strip featured a vertical band of five white pinstripes down the left hand side, continuing on to the shorts, and replicated in the form of ‘trim’ around the cuffs and the collar. It was manufactured by British sportswear company Admiral, who were also responsible for making the England national team’s kit at the time.

Celtic’s kit had barely changed since the early 1930s, with the only variation coming in the alternation between green and white socks. By 1976 they had settled on white, meaning that the kit from that season was largely indistinguishable from any other Celtic kit of that generation, except for the addition of the manufacturer’s Umbro logo on the top and shorts for the first time.

The final took place at Hampden Park on November 6th, 1976, in front of a crowd of almost 70,000. Celtic dominated the match, racking up 16 corners compared to Aberdeen’s one, and according to one report the following day, ‘made enough chances to win half a dozen League Cups’. Aberdeen goalkeeper Bobby Clark was in inspired form, making a number of saves to hold off the onslaught, while Celtic’s strikers were also wasteful in front of goal. Nevertheless, the game appeared to be going according to the script when Kenny Dalglish put Celtic ahead from the spot after just 12 minutes.

Thirteen minutes later, though, Drew Jarvie headed an equaliser, and the rest of the match saw Aberdeen valiantly battling to thwart a relentless Celtic attack. As 90 minutes came and went and the match entered extra time, substitute Davie Robb stunned the favourites when he prodded home a flick-on at the back post to put the Dons ahead. Celtic continued to press but Aberdeen held on to clinch an unlikely triumph.

One newspaper called the victory ‘smash and grab’, while another punned on the the goalscorer’s name, accusing the Dons of ‘Robbing the favourites’. But for Aberdeen and their fans, the stats were irrelevant. Their team had upset the odds to bring home their first League Cup for 21 years, and set in motion a glorious period for the club that would see an unprecedented amount of silverware heading north to the Granite City over the next decade.