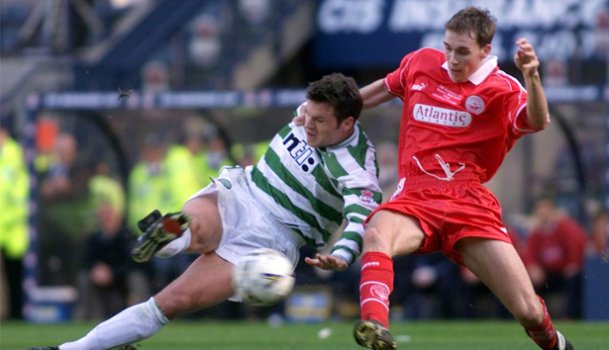 March 2000 was the last time Celtic and Aberdeen faced-off in the League Cup Final. Neil Sargent takes a look at the game itself, and the traditional kits worn by the teams on that occasion.

Sunday March 19, 2000, was the last time that Aberdeen and Celtic met in the League Cup final.

It was a game between two struggling sides, both seeking a silver lining to disappointing campaigns, and both wearing a kit that could be described as falling into the ‘traditional’ bracket.

1999-00 was Aberdeen’s second season with the same kit - an all-red outfit made by Puma and featuring the company’s logo heavily on the white trim that adorned the shorts and top. It was sponsored by Atlantic Telecom which was headquartered in the city and owned by Aberdonian entrepreneur Graham Duncan

Celtic’s iconic hooped jersey was manufactured by Umbro, as it had been since 1976, and sponsored by another telecoms company - Hampshire-based NTL. The design featured thinner hoops, and more of them, than traditional Celtic strips of the past, but was otherwise as you’d expect with one of the most consistent and unchanging kits in world football.

On the pitch, however, both sides were experiencing difficult campaigns in the league. Aberdeen were battling to avoid finishing bottom of the table after a poor start to the season which had seen them lose their first six games without scoring a goal, and pick up just two wins before Christmas.

Celtic, on the other hand, had started the season well but had lost their form after the festive period and replaced manager John Barnes with Kenny Dalglish following their Scottish Cup defeat to Inverness Caledonian Thistle in February.

In the head-to-head between the sides, though, it had been a season of total dominance for Celtic. John Barnes’ men had won 5-0 at Pittodrie on the opening day of the season, thrashed them 7-0 at Celtic Park in October, then 6-0 at Pittodrie again just before Christmas, meaning that the sides went into the cup final with a season aggregate score of 18-0 after just three games.

Nevertheless, Aberdeen approached the final following their best run of the season. Four wins in their last five league matches had lifted them off the bottom of the Premier League table for the first time and, although their involvement in the final coupled with Kilmarnock’s draw at St Johnstone on the Saturday meant that by kick-off time they had returned to the foot of the table on goal difference, Skovdahl’s men would have two games in hand when they returned to league action after the Hampden showpiece. On top of that, their defeat at Motherwell two weeks previously was their only loss in 11 matches across three competitions since losing to Rangers at Ibrox in January.

The Celtic team was without star man Henrik Larsson, who had already scored five goals against Aberdeen that season, as he was still recovering from a broken leg suffered against Lyon in the UEFA Cup in October. The line was led by Mark Viduka, who had himself scored six times against the Dons in their previous three meetings, and who would go on to finish the season with 27 goals from 38 appearances.

The Dons started the match brightly but it was Celtic who went ahead when another Norwegian, Vidar Riseth, poked the ball under Jim Leighton after 15 minutes. Unlike their previous meetings that season, Aberdeen didn't crumble and it wasn’t until just before the hour mark that Celtic finally made the result safe when Tommy Johnson raced clear and beat Leighton low to his right.

Solberg was sent off just minutes later for a second yellow card and Celtic saw out the game to clinch Dalglish’s first, and only, trophy in charge of the club where he is still a legend.

Following the final, Aberdeen did finally find the net against Celtic in the one remaining league fixture between the sides but still lost the game 5-1, taking the total damage against the Hoops that season to 25 goals to one. The Dons finished bottom of the table but remained in the Premier League due to league expansion, while Celtic finished second, 21 points behind champions Rangers. Dalglish departed in the summer to be replaced by Martin O’Neill and the rest, as they say, is history.