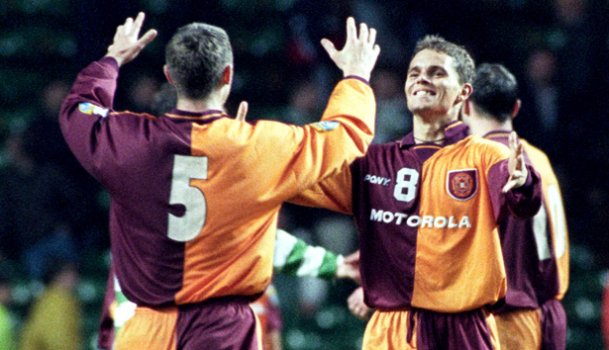 Neil Sargent talks us through Motherwell&#39;s change from the norm in the 1996/97 campaign in this weeks edition of Talking Kit.

For much of their history, Motherwell’s kit designs have been a model of consistency.

Since they first wore an amber top with horizontal claret band across the chest in 1928, almost 75% of their kits have featured the same design, including an unbroken spell of 41 years between '28 and ‘69. At the start of the 2016-17 season, 10 of the Steelmen’s last 11 kits had been designed in the same mould.

It’s fair to say, then, that Motherwell’s decision to dispense with the traditional design at the start of 1996-97 season was unusual. The design that they choose to replace it with, though, was even more unexpected.

The kit can best be described as a ‘Battenberg’ design, with the shorts and socks creating a 2-by-2 check pattern, alternately coloured in claret and amber, which looked startlingly similar to the famous pink and yellow sponge cake.

The kit was manufactured by American sportswear company Pony, who were popular in Scottish football throughout the 1990s, also making kits for Hearts and Dundee United amongst others. It was sponsored by Motorola who were six years into a partnership with the club that would ultimately endure for more than a decade.

On the field, the club was in the twilight of one of its most successful periods. After winning the Scottish Cup in 1991 with a famous 4-3 extra time win over Dundee United, they had finished third in the Premier Division in 1994, qualifying for the UEFA Cup where they played German giants Borussia Dortmund. 1994-95 saw them go one better as, under the management of Alex McLeish, they finished second in the table behind champions Rangers.

1995-96, however, had seen them slip to eighth place, leaving expectations slightly lower as the 1996-97 season approached. The squad looked promising though, including legends like Tommy Coyne, Owen Coyle, Brian Martin, John Philliben, Jamie Dolan and Eddie May, as well as young stars like Steve McMillan and Lee McCulloch who would both go on to make big-money moves to Wigan Athletic in the future.

The season quickly became all about survival for the Fir Park men as they battled with Raith Rovers, Hibernian and Kilmarnock to avoid the one automatic relegation spot and the second relegation play-off place. As the end of the season approached, Raith Rovers looked certain to finish bottom but Kilmarnock hit a sensational run of form including wins over both Rangers and Celtic to put themselves in pole position to avoid the play-off spot. As the ante was upped, Hibernian also started winning and things looked ominous for Motherwell as one of the most thrilling relegation battles in living memory reached a stirring climax.

But, with just four games to go, Alex McLeish’s men thrashed Raith Rovers 5-0 then picked up a  crucial point at home to Dundee United. Their next match, though, was away to a Rangers side who were just one win away from clinching nine-in-a-row.

In a famous upset, two goals from Owen Coyle put Rangers’ title party on hold and gave Motherwell a vital three points in their fight to beat the drop. It left them level on points with Hibernian but, crucially, Alex McLeish’s side had a comfortably superior goal difference.

With Hibs being held to a 1-1 draw against already-relegated Raith Rovers on the final day, ‘Well secured their survival with a nailbiting 2-2 draw against Dunfermline at Fir Park. It might not have been as triumphant as some of their more recent successes, but the celebrations were just as heartfelt.