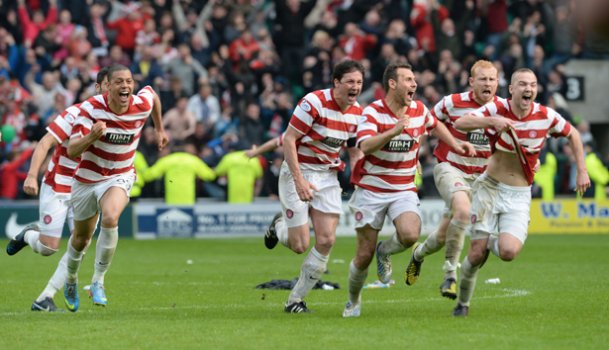 Just 12 months later, Neil led Accies to a sensational return to the Premiership following a remarkable play-off victory over Hibernian.

The team that Neil inherited had finished the 2012-13 season in fifth place in the First Division but the squad contained a number of promising young players who looked set to continue Hamilton’s impressive record of youth development.

Accies’ home kit at the time was a model of consistency. The design hadn’t really changed much since 1997, when they returned to red and white hoops after a few years of experimentation with some more adventurous styles. The 2013-14 version was manufactured by Nike, had white shorts and socks (as every home kit had for the previous decade) and was sponsored by Glasgow-based logistics firm M&H.

The team started the season in blistering form, winning five of their opening six matches and drawing the other one away to Dundee, putting them five points clear at the top. They remained there until just before Christmas when Dundee leapfrogged them for the first time.

By the end of January the lead had changed again as Falkirk rose to the top of the pile in a title chase that was quickly becoming a three-horse race.

Between then and the end of the season all three teams spent time at the top in a nip and tuck battle that was too close to call.

With just two games left, Accies held a one-point lead, but an unexpected 4-1 reverse at Dumbarton handed the initiative back to Dundee. With a two-point advantage and a goal difference that was eight better than Hamilton’s, it looked like the Dens Park side just needed a draw on the final day of the season to be promoted as champions. Falkirk were three points behind the leaders and still in contention, but would require both teams above them to lose if they were to have any chance.

Playing at home to Dumbarton on the final day, Dundee raced into a two-goal lead but the Sons pulled one back in the second half. It was down at New Douglas Park, however, that the real story seemed to be developing.

In a game that will be remembered as one of the most remarkable in Scottish football history, Accies scored beat Morton 10-2 and all but wiped out Dundee’s goal-difference advantage.

Suddenly, a draw for the Dee might not be good enough and, with the score still at 2-1, nerves were jangling. The Dark Blues held on, though, and as the final whistle blew, they celebrated promotion as champions. But Accies knew that they would go into the play-offs on a high after an unforgettable afternoon that seems unlikely to be repeated any time soon.

After seeing off Falkirk in the semi-finals, Accies met Terry Butcher’s Hibernian for the right to play in the Premiership the following season.  Hibs looked to be cruising after winning the first leg at New Douglas Park 2-0, but Jason Scotland’s 13th-minute strike at Easter Road brought Neil’s men right back into it and, with just seconds of injury time remaining, Tony Andreu stabbed home at the near post to send the tie to extra time.

No further goals followed and the game went to penalties. Accies kept their cool, scoring all four kicks and Cuthbert saved from Kevin Thomson and Jason Cummings to spark wild celebrations and give Neil promotion in his first full season in charge.