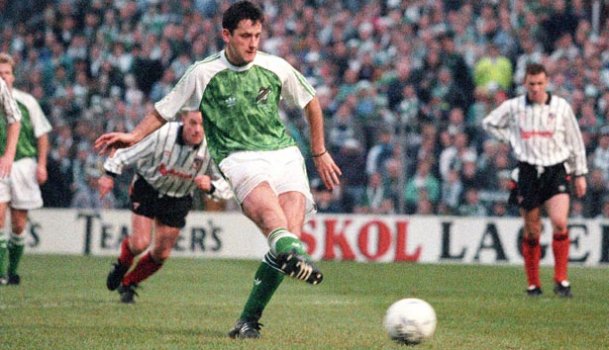 We take&nbsp;a look at the story behind the Hibernian home kit from the 1991/92 season.

Neil Sargent rolls back the years and takes a look at the story behind the Hibernian home kit from the 1991/92 season.

The late 1980s and early 1990s were traumatic times for Hibernian fans, but one match in October 1991 provided a stunning moment of affirmation, which helped re-establish the Leith-based side as a force in Scottish football once again.

The late 1980s saw huge political change across the world as the Berlin Wall fell and the Cold War, which had terrified the planet for the best part of a decade, finally came to an end. Scottish football was also changing, with the announcement that the Premier Division would be expanded from 10 teams to 12 teams at the end of the 1990-91 season.

Hibernian were also undergoing a period of change off the pitch and finished the 1990-91 campaign second bottom of the league, with just six wins to their name all year.

In spite of the challenges the club were facing, manager Alex Miller provided a beacon of stability for the Hibees. As the new season approached, he pulled off one the best moves of his career, persuading striker Keith Wright to join the club from Dundee. Wright would go on to make more than 200 appearances, becoming a legend in the process.

For the 1991-92 season the club decided to stick with the same kit that they had worn during the 1990-91 campaign. The body of the kit was mottled green while the white sleeves and shorts bore the trademark three stripes of the manufacturer, Adidas. Unusually for the time, Hibs went into the campaign without a main shirt sponsor after ending a deal with Frank Graham Group the season before.

The league campaign proved to be their most successful for a number of years, finishing fifth and a full 25 points off the relegation zone. It was in the League Cup, however, that the team wrote its name into the history books.

After comfortably seeing off Stirling Albion 3-0 at McDiarmid Park (the match was moved due to Hibs’ objections to playing on Albion’s plastic surface), they edged out Kilmarnock 3-2 before beating Ayr United 2-0 in the quarter final to set up a semi against a Rangers side who were in the midst of their famous nine-in-a-row era. A header from Keith Wright was enough to give Hibs a famous Hampden win and set up a final against Dunfermline the following month.

In front of more than 40,000 fans at Hampden, second-half goals from Tommy McIntyre and Wright gave the Hibees their first trophy win since 1972 and exorcised all of the demons of the previous 10 years. After facing the very real prospect of extinction just over a year earlier, Hibs had reasserted themselves on the national stage and shown everybody that they were very much here to stay.