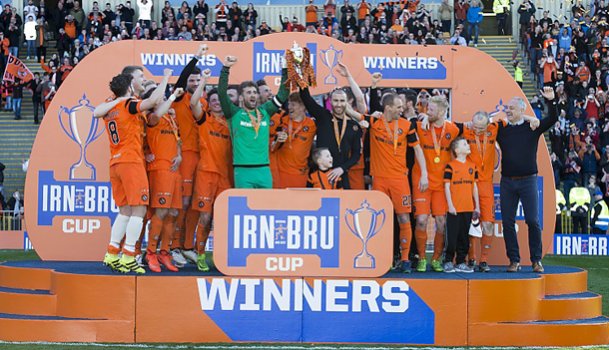 10 things about the IRN-BRU Cup

The IRN-BRU Cup kicks off this evening, with a place in round two on September 2/3 up for grabs. Here are a few facts and figures as the tournament enters its 27th season.

The IRN-BRU Cup kicks off this evening, with a place in round two on September 2/3 up for grabs.

Here are a few facts and figures as the tournament enters its 27th season.

Dundee United are the current holders of the trophy after beating St Mirren 2-1 at Fir Park in March - Thomas Mikkelsen scored the winning goal.

1 The competition began life as the B&Q Centenary Cup, with Dundee beating Ayr United 3-2 at Fir Park in the first final in November 1990. It has been held every season since, with the exception of 1998/99 when it was not played due to the lack of a tournament sponsor.

2 Terry Christie is the only manager to have won the trophy twice - with Stenhousemuir in 1995/96 and Alloa Athletic in 1999/00. Both finals were won after penalty shoot-outs.

3 The first goal of last season’s competition was scored by Dean Hawkshaw for Kilmarnock’s U20 side after just 12 seconds against Queen’s Park at Hampden. However, Liam Brown equalised almost immediately and Gus MacPherson’s side went on to win 5-2.

4 The Dundee United team that lost on penalties to Stenhousemuir in the 1995/96 final included seven players who had either been capped, or would go on to become internationalists – Maurice Malpas, Steven Pressley, Christian Dailly, Andy McLaren, Gary McSwegan, Owen Coyle and Robbie Winters.

6 Two players have scored final hat-tricks - Billy Dodds for Dundee in 1990/91 and Paul Sheerin for Inverness Caley Thistle in 1999/00.

8 Goalkeeper Tony Parks won the tournament with Falkirk in 1993/94, a decade after helping Tottenham claim the UEFA Cup. In the losing St Mirren team that day was John Hewitt, who famously scored the winning goal for Aberdeen in the 1983 European Cup Winners’ Cup final against Real Madrid in Gothenburg.

9 The first ever hat-trick in this competition was scored by John Sludden of Kilmarnock in a 4-1 win over Stirling Albion at Rugby Park in October 1990.

10 Thursday’s second-round draw at the Falkirk Wheel will include Linfield and Crusaders from Northern Ireland, Welsh clubs The New Saints and Connah’s Quay Nomads and Sligo Rovers and Bray Wanderers from the Republic of Ireland.