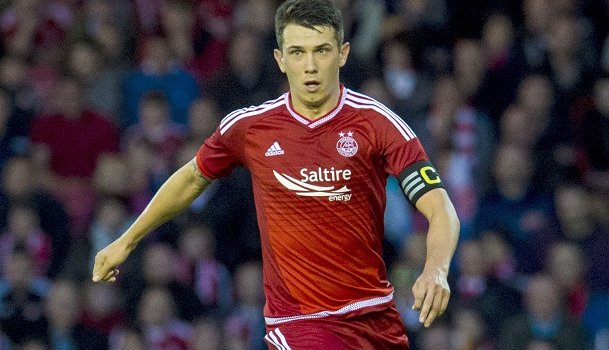 11 next in line for a Scotland call-up

Monday&#39;s Scotland squad announcement brought with it the news that Stuart Armstrong had been named among the group.

Monday's Scotland squad announcement brought with it the news that Stuart Armstrong had been named among the group.

The Celtic midfielder may not receive his first cap during the crucial Euro 2016 qualification double-header, but his inclusion is no less deserved and his debut will only be a matter of time.

So, who's next? Which SPFL players, as yet uncapped, have the best hope of breaking into the Scotland set-up over the next couple of years? Craig Fowler runs down the top 11.

Ryan Jack (Aberdeen)
The 23-year-old has made almost 200 appearances for the Dons in an increasingly impressive young career. Last season he was in sparkling form, a real driving force from the middle of the park as Aberdeen racked up win after win. There are very few players in the country better in possession and his all-round game makes him an ideal sitting midfielder.

Ryan Christie (Inverness CT)
Incredibly talented, great in-game intelligence with almost clairvoyant vision, and he works himself into the ground, contrasting the stereotype of a gifted, playmaking midfielder. At 20-years-old he's already made over 60 appearances for his club and has a Scottish Cup winner’s medal. International recognition won't happen this season but it will come a year or so down the line.

Michael O'Halloran (St Johnstone)
An exciting talent who is often worth the price of admission on his own. O'Halloran is at his best running at the opposing defenders, where he's able to slalom through seemingly impenetrable angles before laying on chances for his team-mates. His versatility to play up front, in behind, or on either wing makes him a useful tool for any squad.

Mark Reynolds (Aberdeen)
With his recent injury problems, fans of Mark Reynolds could be forgiven for wondering whether his time in a Scotland shirt will ever come. However, at 28, he's still in the prime of his career, and should be back soon enough at the heart of that solid Aberdeen back-line. The Dons look set again to run Celtic close for the title. With greater media attention on the club, Reynolds' stock will rise high once more.

Callum Paterson (Hearts)
The right-back has been in sparkling form since Hearts returned to the Ladbrokes Premiership. His strong running and uncanny aerial ability have translated seamlessly to the top flight, while his crossing and ability to impact the game in the opposition's penalty area have improved since the conclusion of last season. He has all the tools to be a star.

Ash Taylor (Aberdeen)
Taylor arrived at Aberdeen as a raw talent and endured a difficult couple of months at Pittodrie before blossoming into a dominant centre-back in their title bid last time round. From what we've seen of him so far in the 2015/16, he's continuing to improve as his reading of the game grows to match his immense physical attributes. The Welsh U21 international qualifies for Scotland through his grandparents.

Greg Stewart (Dundee)
Owner of the deadliest left foot in Scottish football. In the recent Dundee derby, the TV co-commentator remarked that there wasn't a chance on before Stewart rifled the ball into the back of the net. Correction: there's always a chance of a goal when Stewart is shooting on his left foot inside 25 yards. Also possesses bags of skill and a good work-rate. Nominated for Player of the Year last term and it wouldn't be surprising to see such praise repeated at the conclusion of this campaign.

Jamie Walker (Hearts)
Hearts’ drop into the second tier benefited no one more than Jamie Walker. He went down a very raw wide player and returned an almost complete attacking midfielder who can play anywhere across the triumvirate supporting the lone striker. Great quickness, dribbling ability, bags of skill and an eye for goal makes him a nightmare for any defender.

Scott Allan (Celtic)
He'll need to break into the Celtic first team and cement his place before any Scotland chat can be considered, but there's no doubting Allan has the talent to make it at the international level. A real talismanic figure in the centre of the park, Allan has the ability to both dictate matches and create opportunities in the final third. He should blossom further in the current Celtic set-up.

Graeme Shinnie (Aberdeen)
Many wondered why he wasn't in the current squad and it's certainly a fair question. Shinnie was excellent for Inverness CT over the past two seasons and he's easily slotted into the current Aberdeen side from the evidence of the first few games. Equally adept at playing at left-back or in the centre of midfield, Shinnie's driving runs and passing ability make him such an excellent all-round footballer.