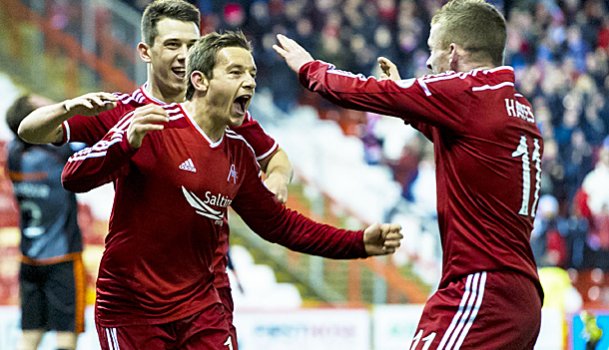 Aberdeen are up to second place in the Premiership after a 1-0 win over Kilmarnock at Pittodrie on Saturday.

Aberdeen are up to second place in the Premiership after a 1-0 win over Kilmarnock at Pittodrie on Saturday.

Peter Pawlett got the only goal midway through the second half as the Dons closed the gap on leaders Celtic - who travel to Dundee United on Sunday - to four points.

Ian Baraclough made a winning start as Motherwell manager as the Steelmen overcame bottom club St Mirren 1-0 in Paisley. Saints had Steven Thompson sent off inside 20 minutes and John Sutton scored the only goal with 18 minutes left.

A 62nd-minute Brian Graham penalty was the difference as St Johnstone edged out Inverness Caley Thistle 1-0 at McDiarmid Park. Ross Draper saw red for the visitors five minutes after they had fallen behind.

Dundee earned a 1-1 draw against Partick Thistle at Firhill, courtesy of a last-minute own goal from Conrad Balatoni after James Craigen had given the Jags the lead.