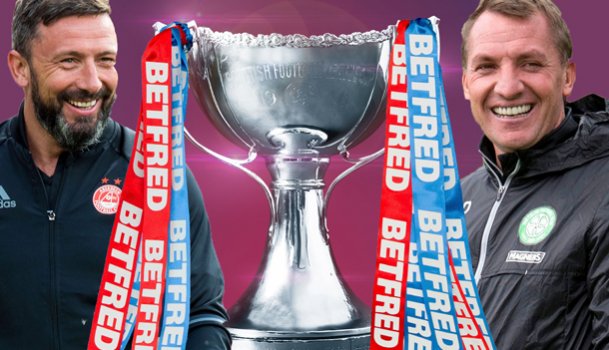 Aberdeen and Celtic meet in Sunday&rsquo;s Betfred Cup final at Hampden Park, live on BT Sport with a 3.00pm kick-off.&nbsp;Here&#39;s our match preview...

Team news: Celtic are without full-back Kieran Tierney while Scott Sinclair is a doubt after being forced off against Barcelona in midweek but Leigh Griffiths is fit to play. Aberdeen are likely to have a full squad to choose from.

Road to the final: Celtic beat Motherwell 5-0 at Parkhead in the last 16 and saw off Alloa Athletic 2-0 with two late goals in the quarter-final. Moussa Dembele grabbed an 87th-minute winner as Brendan Rodgers' side defeated Rangers 1-0 in the semi-final.

Aberdeen kicked off with a 2-1 victory away to Ayr United then Adam Rooney's last-minute goal settled the quarter-final against St Johnstone at Pittodrie in their favour. Morton were beaten 2-0 in the Hampden semi-final with goals from Rooney and Kenny McLean.

League Cup pedigree: Celtic are appearing in their 31st final. They have won the trophy 15 times, most recently in 2014/15 when they beat Dundee United 2-0 with goals from Kris Commons and James Forrest. Aberdeen have played in 13 League Cup finals, winning six. Their last success was in 2013/14 when they beat Inverness Caley Thistle 4-2 on penalties after a 0-0 draw at Celtic Park.

Past League Cup meetings: This is only the third League Cup final between the teams. Aberdeen won 2-1 in 1976/77 when a Davie Robb goal in extra time earned Ally MacLeod's men the trophy. Celtic, with Kenny Dalglish at the helm, won 2-0 in 1999/00 with goals from Vidar Riseth and Tommy Johnson. The most recent meeting between the teams in this competition was the 2010/11 semi-final which Celtic won 4-1, with all of their goals coming in the first half.

League Cup stats: This is the 71st League Cup final and there have been six different winners in the past six seasons. Ross County are the current holders, having beaten Hibernian 2-1 in March. Rangers have won the trophy most often, 27 times in all. The last League Cup final hat-trick was scored by Celtic’s Henrik Larsson against Kilmarnock in 2000/01.

This season: Celtic won 4-1 at Parkhead at the end of August and were 1-0 winners at Pittodrie on October 29 thanks to a Tom Rogic goal.

Current form: Aberdeen won 3-1 at Inverness last weekend and have lost only three domestic games this season – two to Celtic and one to Hamilton Accies. Celtic beat Kilmarnock 1-0 a week past Friday but went down 2-0 to a Lionel Messi double when Barcelona visited in the Champions League on Wednesday. The Parkhead men have failed to win only one SPFL match in 2016/17 – a 2-2 draw at Inverness in September.

Brendan Rodgers: “Our ambition and hunger have been very much evident since the beginning of the season. It’s no more or less, it’s as it has been for every game we have played. This is a chance to get our hands on the trophy and is something we are looking forward to.”

Derek McInnes: “It is important we don’t think we are just hoping Celtic don’t play well. We have to concentrate on our job. We have to play well, but we have to have a real confidence and belief in our own ability that we can go and win the thing.”

Turnstiles: Open at 1.30pm. Fans are urged to arrive at the stadium in plenty of time as enhanced search procedures will be in operation.

Tickets: There are no tickets available.