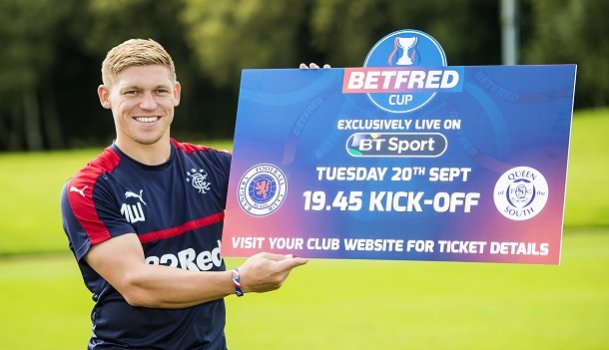 The Betfred Cup quarter-finals begin tonight, with a place in Thursday evening&#39;s semi-final draw at stake.

The Betfred Cup quarter-finals begin tonight, with a place in Thursday evening's semi-final draw at stake.

Last-four ties are due to be played on the weekend of October 22/23, with the final scheduled for Sunday November 27.

Morton v Dundee United - Tuesday, 7.45pm
Morton came from behind to beat Hamilton Accies 2-1 at the SuperSeal Stadium in the last 16 while United saw off Partick Thistle 3-1 at Tannadice thanks to a first-half hat-trick from Cammy Smith. Jim Duffy's men claimed their first Championship victory of the season at the weekend, beating Dunfermline 2-1, while Ray McKinnon's side lost 3-1 at Falkirk. The teams last met in this competition in September 2003 when a Jim McIntyre double helped United win 3-1.

Rangers v Queen of the South - Tuesday, 7.45pm (Live on BT Sport)
Rangers cruised past Peterhead 5-0 at Ibrox in the previous round while Queen of the South hit back to beat Hibernian 3-1 at Easter Road. Gavin Skelton's side are on a superb run of results and saw off Raith Rovers 3-1 at Palmerston on Saturday to go top of the Ladbrokes Championship. Rangers created plenty of chances against Ross County at Ibrox but were held to a 0-0 draw. Mark Warburton's side won 4-3 when the teams met in Glasgow in March.

Celtic v Alloa Athletic - Wednesday, 7.45pm (Live on BT Sport)
Celtic were 5-0 winners against Motherwell in the previous round while Alloa shocked Inverness Caley Thistle 1-0 at the Indodrill Stadium. The Wasps have won 11 of their 12 matches in all competitions this season and came from behind to beat Queen's Park 2-1 at Hampden on Saturday. Jack Ross' side share the League 1 lead with Livingston as they bid to make an immediate return to the Championship. Celtic dropped their first points of the season in a 2-2 draw at Inverness on Sunday but have been scoring freely under Brendan Rodgers.

Aberdeen v St Johnstone - Thursday, 7.45pm (Live on BT Sport)
Both teams go into the match on the back of weekend wins - Aberdeen came from behind to defeat Dundee 3-1 at Dens Park on Sunday and St Johnstone edged out Hearts 1-0 at McDiarmid Park on Saturday. The Dons knocked out Ayr United in round two, winning 2-1 at Somerset Park, while Saints prevailed 3-2 against Hearts in a thrilling match in Perth. It was 0-0 when the sides met at McDiarmid Park on August 7 while the most recent Pittodrie encounter finished 1-1 in February.